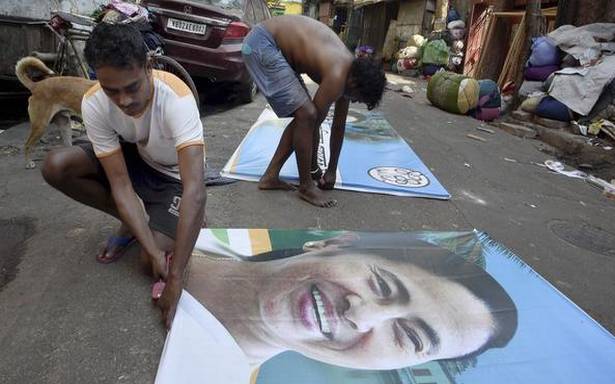 West Bengal is poised for a high stakes, historic Assembly polls for 2021 that will be held over a record 33 days in eight phases. The ruling Trinamool Congress (TMC) that has been in power for ten years is not only grappling with anti-incumbency but is also faced with the challenge of a dramatic rise of the BJP. This is the first time in the political history of West Bengal that the BJP has emerged as a challenger to the ruling party.

The TMC, which in the past few months has been dealing with a series of defections, is relying on the charisma of West Bengal Chief Minister and party chairperson Mamata Banerjee to tide over the toughest political challenge the party has ever faced since 2011.

Even after ten years in power Mamata Banerjee remains the tallest leader and the biggest crowd puller in the State. The TMC government under Ms. Banerjee claims to have launched 70 welfare schemes, including conditional cash transfer to girls and women and the much-touted universal health scheme Swasthsathi where cards have been issued in the name of the eldest woman of the family.

A carefully crafted campaign of the TMC aims to retain people’s faith in Ms. Banerjee by projecting her as “Bengal’s own daughter”.

The ruling party has also brought to fore the issue of identity in the polls, dubbing the BJP an “outsider” party, emphasising that “Bengal will be governed by people of the State and not by people from Gujarat”. Slogans like “Joy Bangla” raised at public gatherings are coupled with projecting Ms. Banerjee as crusader for “Bengali pride”.

Since 2019, the BJP which lacked an organisational base in the State, has used defections as a political tool and inducted senior TMC leaders like Suvendu Adhikari and Rajib Banerjee who have a significant support base and acceptability among the masses. The saga of defections has continued even after dates for Assembly polls were announced.

In a State starved of industry and employment, which sees a huge migration for work, the BJP is selling the dream of a “Sonar Bangla (Golden Bengal)”. The party has also relentlessly targeted the TMC accusing it of denying benefits of the Pradhan Mantri Kisan Samman Nidhi and non-implementation of Ayushman Bharat schemes in the State. The party has promised ₹14,000 — the sum of seven instalments of PM Kisan scheme since it was started — to about 73 lakh farmers if it comes to power.

Apart from the development plank, the BJP is not shying away from using religious rhetoric to polarise the electorate, with strident slogans of “Jai Shri Ram” and rath yatras, or parivartan yatras as the party calls it, criss-crossing the State.

Also read: Tie-up with TMC in W.B. would be suicidal for Left, help BJP: CPI(M) mouthpiece

While the BJP is raising issues of “illegal infiltration” and accusing the TMC of indulging in “appeasement politics”, it is maintaining a strategic silence on the implementation of controversial Citizenship Amendment Act (CAA), which Ms Banerjee has vehemently opposed. The BJP is also trying to reach out and placate the Matua sect, largely Hindu refugees from Bangladesh who are pressing for the implementation of CAA.

Both the TMC and the BJP are also locked in a bitter contest on appropriation of cultural icons of West Bengal, a process that started months before the polls were announced. The tussle was visible on several high profile occasions including 125th birth anniversary celebrations of Netaji Subhas Chandra Bose and recent events at Gurudev Rabindranath Tagore’s Visva Bharati University.

The third player in the political matrix, the Left-Congress alliance, which was the main opposition force till 2019, has got a new lease of life as fresh political equations emerged after they roped in influential Islamist leader and Furfura Sharif peer Abbas Siddiqui’s newly formed party Indian Secular Front.

What makes the combination of Left and Congress with ISF effective is their ability to influence Muslim voters. As per the last census the Muslim population in the State is about 27.01% There are 75 Assembly seats out of 294, where Muslims are in a majority. Even in the 2019 Lok Sabha polls the TMC maintained a lead in 80% of these Assembly seats. Any possible split in Muslim votes will pose a challenge for the ruling party.

The significance of Left-Congress-ISF combine became clear, particularly after the Brigade rally on February 28, indicating that the polls were not going to be a bipolar contest as was between the TMC and the BJP, with the alliance likely to upset calculations of both parties.

For both the Left and the Congress whose support base has been going down, the 2021 Assembly poll is a battle to re-establish their relevance in State politics. Leaders of both parties say that they are presenting the real alternative to the people against the “competitive communalism” of the BJP and the TMC.

The Left still has a dedicated cadre base that was evident in the recent Brigade rally and other programmes, while the Congress has maintained its dominance over certain districts in central Bengal like Malda and Murshidabad. In their battle to restore lost ground, the Left and Congress leadership have attacked both BJP and TMC with equal intensity and pointed out that going easy on the latter is not an option.

As the campaign gains momentum, another provocative slogan has been raised by both the TMC and BJP — “Khela hobe (the game will be played)” — implying the threat of political violence in the weeks to come.