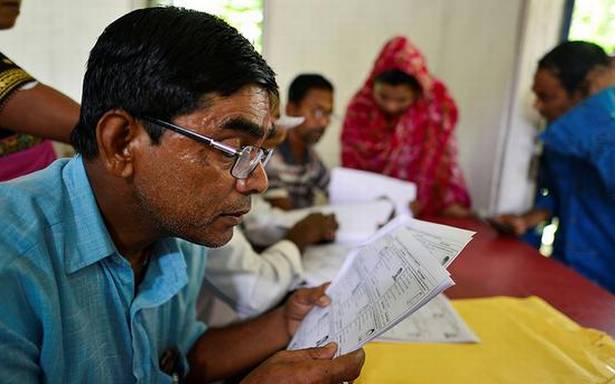 The Assam National Register of Citizens (NRC) authority has approached the Supreme Court seeking a comprehensive and time-bound re-verification of the citizens’ list, highlighting “major irregularities” in the process.

The interlocutory application by State NRC Coordinator Hitesh Dev Sarma also prays for the deletion of illegal voters from Assam’s electoral rolls besides the revision of the draft NRC and a supplementary list under a relevant clause of the Schedule of Citizenship (Registration of Citizens and Issue of National Identity Cards) Rules, 2003.

The notification for starting the Supreme Court-monitored exercise to update the 1951 NRC in Assam was issued in December 2013. The final draft published in August 2019 had excluded 19.06 lakh out of 3.3 crore applications for lack of adequate documents establishing them as Indian citizens.

The case was accepted on May 11.

Highlighting that the final NRC is yet to be published by the Registrar General of India, the application states that some “issues of substantive importance” cropped up while preparing the rejecting slips, thus delaying the process.

Each of the 19.06 lakh people left out of the draft NRC are required to approach the nearest Foreigners’ Tribunal within 120 days of receiving a rejection slip for weighing their citizenship claims.

Highlighting some “glaring anomalies of serious nature” noticed in the updating exercise that could have a bearing on security and integrity of the nation, the plea admits the NRC process helped create a “huge digitised database of NRC of 1951 and the electoral rolls of Assam up to 1971, as also the digitised details of NRC applicants”.

“The preparatory works of NRC updation had led to the creation of the first breakthrough software application which was designed, namely the Digitised Legacy Data Development… It is an online database which enables searching the name of any person whose name appears in the legacy data. Such search is possible in English and also displays variations in spellings, as also leading to display of the actual image of the relevant legacy data,” the application said.

“The number of legacy data made available to the public was 2.01 crore. Similarly, a total number of 3,30,27,661 persons applied through 68,37,660 applications, resulting in submission of about 6.5 crore supporting documents which were received along with the application forms, were all digitised,” it added.

It, however, underlined the difficulty in detecting “manipulated or manufactured secondary documents” and fraudulent entry in electoral rolls through office and field verification. The reason was cited as “backend verification in the preparation of electoral rolls”.

In this context, the application said that 3,93,975 people out of the 40,07,719 people excluded from the draft NRC (published in July 2018 before the claims and objection process helped 21.01 lakh people make it to the final draft a year later) did not file any claims. They were put on the final exclusion list.

“After some sample checks now and analysis of the names of the persons who did not file claims on the basis of surnames only, it was found that 50,695 persons were apparently eligible for inclusion in the NRC,” the application said.

Of these people, 7,770 were found to be from groups categorised as “original inhabitant (OI)” while 42,925 were “persons from other States”.

This figure may increase if detailed re-verification was done. For a flawless and complete NRC, names of these people had to be included in the final NRC, failing which it would lose its acceptability, the plea pointed out.

Another issue flagged was of some “undeserving persons getting entry in NRC through wrong marking of OI”. There was every possibility that some people without valid documents got their entry into the NRC through the OI window “quite inexplicably”, the application said.

The NRC authority also said the software prepared for matching the family tree of applicants had no provision for quality checks. “Rather, the software was prepared to avoid any quality checks giving the verifying officers of doubtful integrity a free hand to upload wrong results to fulfil their vested interest,” the plea said, justifying the need for re-verification of the citizens’ list.