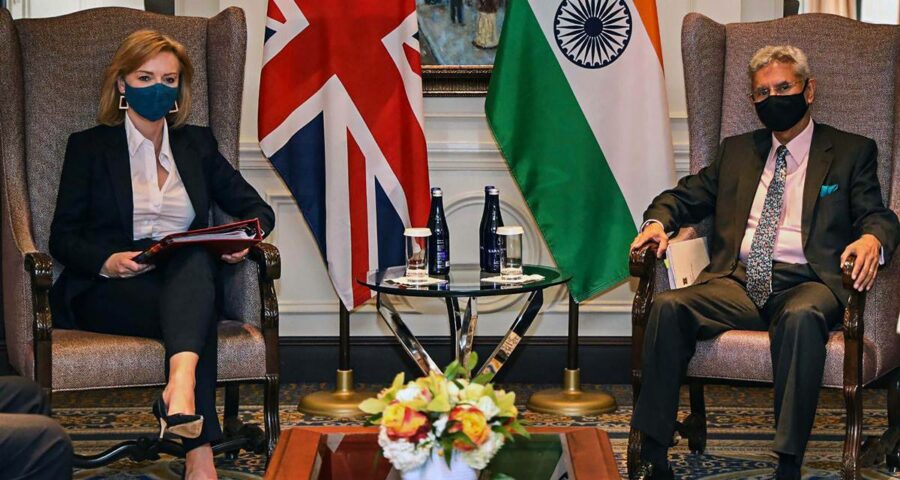 Shringla's comments come at a time when France’s anger and disappointment over the AUKUS deal has raised questions on the unity among “like-minded countries” over the Indo-Pacific strategy. A DAY before Prime Minister Narendra Modi leaves for the US to attend the first in-person Quad leaders’ summit and meet US President Joe Biden, India —in its first reaction to the Australia-UK-US (widely referred to as AUKUS) deal — said the two are “not groupings of a similar nature” and since India is not a party to AUKUS, it is neither relevant nor will it have any impact on the Quad.

This was spelt out by Foreign Secretary Harsh Vardhan Shringla, while responding to questions on the possible impact of the AUKUS on the Quad. He sought to make it clear that while AUKUS is a “security alliance”, Quad is a “plurilateral grouping of like-minded countries that have a shared vision of their attributes and values”.

Last week, the US, UK and Australia signed a new trilateral security alliance for the Indo-Pacific in an attempt to counter China’s growing assertiveness in the region. The pact, termed AUKUS, is expected to help Australia acquire nuclear-powered submarines in a bid to counter China’s growing power in the strategically vital region. France, which lost out on a USD 65 billion submarine deal with Australia and had not been notified about the AUKUS alliance, reacted angrily and called it a “stab in the back”.

Shringla’s comments come at a time when France’s anger and disappointment over the AUKUS deal has raised questions on the unity among “like-minded countries” over the Indo-Pacific strategy.

“Quad and the AUKUS are not groupings of a similar nature…Quad is a plurilateral grouping – a group of countries that have a shared vision of their attributes and values. They also have a shared vision of the Indo-Pacific region as a free, open, transparent, inclusive region. The Quad has adopted a positive, proactive agenda with a wide range, and varied array, of initiatives at the global level to address some of the issues of the day. This includes dealing with the Covid-19 pandemic, including the supply of vaccines to the Indo Pacific region. It includes working on new and emerging technologies, issues like climate change, infrastructure, maritime security, education, humanitarian assistance and disaster relief. There’s a wide array of initiatives that the Quad has undertaken, which is designed to cater to the requirements of the Indo-Pacific region,” said Shringla.

“On the other hand, AUKUS is a security alliance between three countries. We are not party to this alliance. From our perspective, this is neither relevant to the Quad, nor will it have any impact on its function,” he said.

Hours later, Modi spoke with French President Emmanuel Macron and “reviewed the increasing bilateral collaboration in the Indo-Pacific region, and the important role that the India-France partnership plays in promoting stability and security in the region”, a Ministry of External Affairs (MEA) statement said.

The French government’s statement said they reaffirmed their shared commitment to act jointly in an open and inclusive Indo-Pacific, including in the framework of the Europe-India relationship and European initiatives in the Indo-Pacific. “This approach aims to promote regional stability and the rule of law, while precluding any form of hegemony”, it said, with an oblique reference to Beijing.

The two leaders also discussed regional issues, including recent developments in Afghanistan. In this context, the MEA statement said they “shared their concerns about the possible spread of terrorism, narcotics, illicit weapons and human trafficking, as well as the need to ensure human rights, rights of women and minorities.”

The French statement said the two leaders expressed “grave concerns” about the situation in Afghanistan. “The authorities in power must cut their ties with international terrorism, allow humanitarian organisations to operate throughout the country and respect the fundamental rights of Afghan women and men. Evacuation operations should continue unhindered,” it said.

Shringla, in his briefing, said the Afghanistan issue was also on the agenda of the Quad and bilateral meetings, along with terrorism. This will be the first meeting since the Taliban captured power in Afghanistan in mid-August.

He said the meeting will discuss the “current regional security situation following recent developments in Afghanistan”, considering India’s stakes as a “neighbour and a longstanding and preferred development partner of the people of Afghanistan”. In this context, he said, “we would undoubtedly discuss the need to stem radicalism, extremism, cross-border terrorism and the dismantling of global terrorist networks.”

He also said the UNSC resolution 2593, which was adopted under India’s presidency on August 30, spells out that Afghanistan’s territory will not be used against any other country, and “non-state actors” as well as “countries” need to comply with that. These are thinly-veiled references to Pakistan and anti-India terrorist groups including the Haqqani Network, Lashkar-e-Taiba and Jaish-e-Mohammed among others.

Modi, who leaves for the US tomorrow, will attend a summit hosted by Biden on Covid-19 on Wednesday itself. This will be their first in-person meeting since Biden assumed office in January this year, although they have spoken thrice since November and participated in virtual summits thrice.

During their meeting on September 23, Shringla said, the two leaders will review the “robust and multifaceted” India-US bilateral relationship. “They will also discuss how the comprehensive strategic global partnership between our two countries can be enriched further. The two leaders are expected to discuss how to bolster bilateral trade and investment ties, strengthen defence and security collaboration, boost strategic clean energy partnership, explore new avenues in emerging technologies, including through R&D, innovation, and industry linkages.” They will also discuss the reform of the multilateral system including the UN Security Council.

Besides attending the Quad summit on September 24, hosted by Biden and attended by Australian PM Scott Morrison and Japan’s outgoing PM Yoshihide Suga, the Prime Minister will also have bilateral meetings with all three leaders.

He will also meet Vice President Kamala Harris, his first formal interaction with the first Indian-origin VP in the US administration, and they are expected to exchange views on bilateral, regional and global issues of mutual interest, Shringla said. Harris had called up Modi in June this year for supply of Covid-19 vaccines. Modi will also meet some business CEOs during his stay in the US.

Modi will then travel to New York for the UN General Assembly address, and will hold bilateral meetings with a few leaders on the sidelines on September 25.

External Affairs Minister S Jaishankar and NSA Ajit Doval are also travelling to the US, and will accompany Modi for many of these meetings. Jaishankar is currently in New York, and met his counterparts from France, Australia, UK, Norway and Iraq among others.

Modi’s visit is expected to pave the way for more engagements in the coming months, including the India-US 2+2 talks later this year.