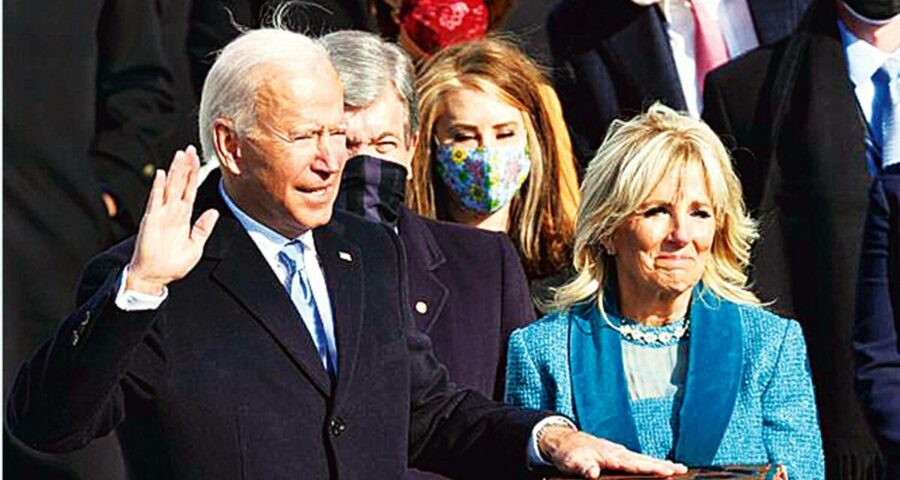 Officials said that New Delhi is looking at “five baskets” of engagement: Strategic, environment, energy and climate change, digital and IT, education and health care. PROMISING to “repair our alliances and engage with the world once again,” Joseph Biden, sworn in as the 46th President of the United States Wednesday, signalled he was turning a troubled page on the Trump era.

For the establishment in New Delhi, along with Indian Ambassador to the US Taranjit Singh Sandhu — who was attending the inaugural — the task is cut out.

Sandhu’s predecessors in Washington, External Affairs minister S Jaishankar and Foreign Secretary Harsh Vardhan Shringla, all are banking on their significant experience of dealing with Washington DC’s Beltway politics – and its key interlocutors.

Sandhu has had two earlier stints —responsible for liaison with the US Congress from 1997 to 2000 as First Secretary (Political); Deputy Chief of Mission from July 2013 to January 2017.

Officials said that New Delhi is looking at “five baskets” of engagement: Strategic, environment, energy and climate change, digital and IT, education and health care.

Biden’s term in the Senate Foreign Relations Committee had coincided with the transformation of the Indo-US relations starting with the Jaswant Singh-Strobe Talbott talks post 1998-Pokhran tests.

Indeed, the key markers of Indo-US engagement took place during Biden’s chairmanship of the powerful Senate panel: Bill Clinton’s visit and the the India-US nuclear deal.

Diplomats recall that for Biden, the “guy on the other side of the table in diplomatic negotiations is not an idiot.” This is a key quality, an official said, that New Delhi hopes to build on especially as both work together with an aggressive China.

Rahm Emanuel, Obama’s chief of staff, once said that Biden helps counter group-think, and Jay Carney, former White House press secretary, said that Biden played the role of the bad guy in the situation room who always asked tough questions and challenged preconceived ideas. This, officials said, will help in the discourse on Pakistan and Afghanistan.

According to Evan Osnos’s biography of Biden, he was against intervention in Libya, and felt that the fall of Muammar Gaddafi would lead to chaos. He was also against the Abbottabad raid arguing that if it failed, Obama would be a one-term President. But, on India, Biden was one of the key advocates of strengthening the Indo-US partnership, especially in strategic areas.

South Block is already looking at the diplomatic calendar ahead — a possible meeting at G-7 in the UK in June providing an opportunity for the two leaders to get together.

But for now, Biden’s priorities will be focused on managing the raging COVID-19 pandemic which has claimed 400,000 lives in the US, an economic crisis and a deeply polarised society and politics as was witnessed during the siege of the US Capitol a fortnight ago.

India will look towards increasing collaboration on the “health care basket”, as Biden goes for a federal mask mandate and vaccine mobilization that will dominate his first 100-day plan.

On the “climate change, environment and energy” basket, Biden’s intention to rejoin the Paris Climate accord is welcomed by New Delhi, and it will look towards cooperation in the LNG, renewable and solar energy sectors.

With about 2 lakh Indian students in the US and the Trump administration’s progressively hardening line on visas, Delhi will look towards easing of norms for those aspiring to study and work there.