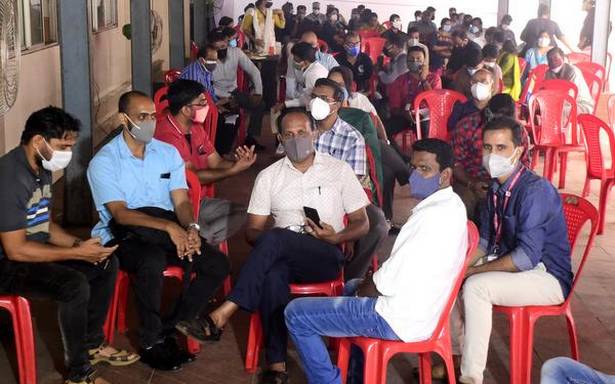 On social media and in chat groups, the Kerala Assembly polls are being widely discussed

Non-Resident Keralites (NoRKs), especially those in the Gulf Cooperation Council (GCC) nations, are keenly watching the developments in the State, where counting of votes to the Assembly polls will be held on Sunday.

Many of them wanted to fly down to exercise their franchise but the COVID-19 surge forced them to stay back in their host countries. Like the residents in the State, they too are glued to television sets, holding weekend discussions, and talking about exit polls and the outcome of the elections in chat groups.

WhatsApp groups also enliven the discussions. “Mainly Gulf NRIs favour two types of political formations – the CPI(M)-led Left Democratic Front and the Congress-led United Democratic Front. The BJP supporters do not have much say in the Kerala polls, but they are busy raising the Sabarimala issue. As for the UDF, it is mostly the IUML that is vociferous in lively debates,” says Mohammed Hashim, a non-resident Indian in Dubai.

“However, the majority of the Kerala diaspora feels that the Pinarayi Vijayan government must continue again. Possibly, his anti-CAA statement has evoked an appeal among a section. How far it will impact the result cannot be defined. Also, it is for the first time that NoRKs are discussing welfare schemes during the polls,” adds Mr. Hashim.

Manoj Pillai, an NoRK in Bahrain , however, has a different opinion about the incumbent government in Kerala. “The government has always indulged in corruption and scams. At the same time, the Left government is taking credit for the schemes and funds provided by the Centre. The NoRKs will opt for a change. Maybe the BJP will win a few seats. But a change of guard is required to prevent the current government from retaining power and creating more damage for the State,” says Mr. Pillai.

Harrison Morris in Saudi Arabia says groups affiliated to both the UDF and the LDF are organising online talks and analysis. “I feel the NoRKs are wholeheartedly engaging in political discussions more than in Kerala. Besides, party supporters are campaigning rigorously. The NDA is not very popular here for obvious reasons,” he adds.

M.R. Rajesh, a legal advisor based in Kuwait, says NoRKs yearn for a change in the government. “We are surprised with the opinion and exit polls,” he adds.