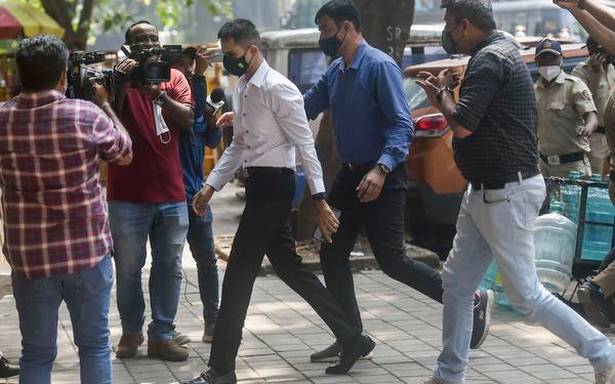 The Narcotics Control Bureau (NCB) and its zonal director Sameer Wankhede approached a special court here on Monday against the allegations of extortion levelled against them in the cruise drugs seizure case in which actor Shah Rukh Khan’ son Aryan Khan is an accused.

The anti-drugs agency and Mr Wankhede in their affidavits said this was an attempt to create hurdles and scuttle the investigation in the case.

The NCB in its affidavit sought that there should be no tampering with the evidence or investigation, while Mr Wankhede refuted the allegations raised against him.

On Sunday, an independent witness in the cruise drugs case, in a statement to the media, claimed that ₹25 crore was demanded by an official of the NCB and other persons, including absconding witness KP Gosavi, to let off Aryan Khan in the case.

Explained | What is ‘conscious possession’ of drugs?

Prabhakar Sail, the ‘independent witness’, told media persons that he had overheard Mr Gosavi telling one Sam D’Souza over the phone, after Aryan Khan was brought to the NCB office following the October 2 raid, about a demand of ₹25 crore and "to settle at ₹18 crore as they have to give ₹8 crore to Sameer Wankhede".

Mr Sail had said he would soon release evidence to support his claim.

The NCB and Mr Wankhede rubbished these claims in their affidavits submitted to the court on Monday.

Without taking names, Mr Wankhede, an IRS officer of the 2008 batch, had claimed in his letter to Mr Nagrale that the threat of jail and dismissal have been issued against him on public media by highly respectable public functionaries.

An NCB team led by Wankhede earlier this month allegedly seized drugs onboard a cruise ship off the Mumbai coast following which Aryan Khan was arrested on October 3.

He is currently lodged in the Arthur Road jail in Mumbai. His bail application is likely to be heard by the Bombay High Court on Tuesday.