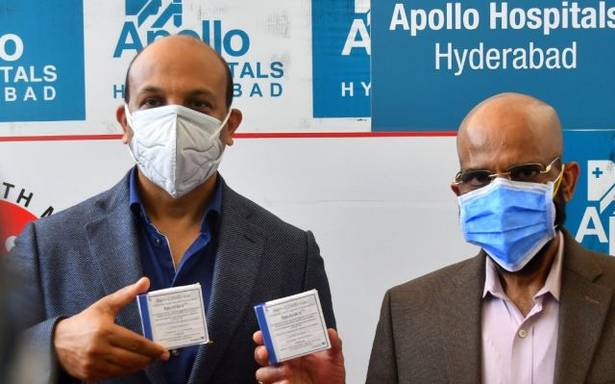 Marketing partner for Sputnik V in India, Dr. Reddy’s had on May 14 announced the rollout of the vaccine in the country

Apollo Hospitals in Hyderabad has started administering Sputnik V, the Russian vaccine against COVID-19, as part of a limited pilot programme rolled out by Dr. Reddy’s Laboratories.

The vaccination began at the hospital in Jubilee Hills in Hyderabad on May 17 and will be launched at the Apollo Hospitals in Visakhapatnam on May 18. The vaccinations would follow the SOPs as recommended by the government, including registration on CoWIN, a statement said.

Marketing partner for Sputnik V in India, Dr. Reddy’s had on May 14 announced the rollout of the vaccine in the country. It plans to make it available at 35 cities, primarily metros and tier I locations. The maximum retail price per dose, of the two dose, imported Sputnik V, is ₹995, including a 5% GST.

Sputnik V, unlike the other two vaccines Covaxin and Covishield that are approved and being administered in the country since mid-January, uses two different vectors for the two shots. Since it has to be stored at minus 18 degrees C, special handling and logistics facilities are required.

In terms of cold chain management, Sputnik has certain additional requirements. “Once we are able to demonstrate [the handling, it] will pave the way for many more vaccines to be imported into the country,” said Dr. K.Hari Prasad, President – Hospitals Division, Apollo Hospitals Enterprises.

“Today we will be beginning a trial run to make sure all elements, from storing, administering and monitoring are run as per SOP… once we are confident will rollout to other cities,” he said, adding Sputnik V would be available at Apollo Hospitals in major cities such as Delhi and Mumbai.

On May 14, Dr. Reddy’s had announced rollout of Sputnik. It followed the company getting regulatory clearance from Central Drugs Laboratory in Kasauli, Himachal Pradesh for the first consignment of the vaccine from Russia that arrived in Hyderabad on May 1. The second consignment, consisting of 60,000 doses of the second component of the vaccine, arrived on May 16.