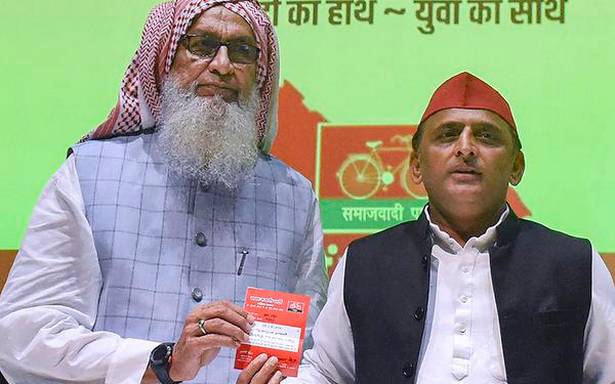 In 2016, amid an internal feud in the Samajwadi Party (SP), Akhilesh Yadav had opposed the merger of the Quami Ekta Dal of controversial politician Mukhtar Ansari with his party, to guard his clean image ahead of the 2017 Assembly election in Uttar Pradesh.

Mr. Akhilesh, who was then the Chief Minister, even sacked a senior Minister, Balram Yadav, for facilitating the merger, which was eventually revoked despite intervention by his uncle, Shivpal Yadav.

As Mr. Akhilesh took control of the SP, the Ansaris who have clout in parts of eastern Uttar Pradesh, went on to extend support to the rival Bahujan Samaj Party (BSP), vowing to teach him a lesson. They called him an egotistic person and accused him of tainting the image of the Ansaris and humiliating them for his own “branding”.

In a shift from an image-conscious approach to a politically opportunistic one, Mr. Akhilesh on Saturday inducted Mukhtar Ansari’s elder brother Sigbatullah Ansari, a former MLA from Mohammadabad in Ghazipur, into the SP.

Mr. Sigbatullah lost the 2017 election on a BSP ticket, while Mukhtar retained his seat, Mau, but his son and debutant Abbas Ansari lost by a thin margin.

In the 2019 Lok Sabha election, Mukhtar’s second brother Afzal Ansari contested from Ghazipur on a BSP ticket and won as part of the SP-BSP alliance.

The support of the Ansari family, which has been under the radar of the Yogi Adityanath-led BJP government in the State, is expected to boost the SP in Ghazipur, Ballia, Mau, Azamgarh, Varanasi and surrounding areas, and is also seen as a move to prevent a division of Muslim votes.

Along with Mr. Sigbatullah, Ambika Chaudhary, former U.P. Minister from Balia and a former aide of SP patriarch Mulayam Singh Yadav, returned to the party after spending more than four years in the BSP.

Mr. Chaudhary, who served as Minister during the tenures of both Mr. Mulayam and Mr. Akhilesh, was overwhelmed with emotions at his joining ceremony.

“There are ups and downs in politics. But who stands by you at the right time, is your friend,” Mr. Akhilesh said.

The SP chief said be would try to bring back all those leaders who were close to Netaji, his father, to the party as it looks to challenge the BJP in 2022.