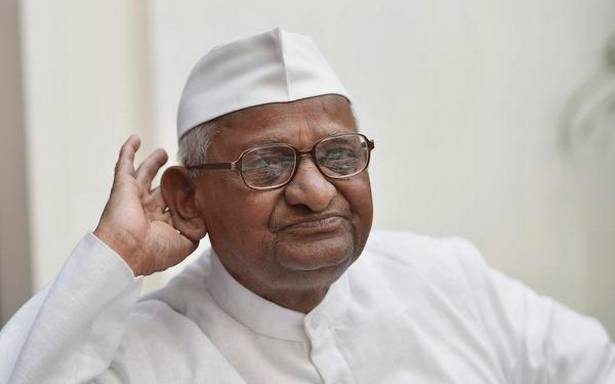 Doctors say there is a minor block in the coronary artery

Veteran social activist Anna Hazare underwent an angiography at a private hospital here on Thursday after he complained of mild chest pain.

Doctors at Ruby Hall Clinic, where the 84-year-old Mr. Hazare underwent the procedure, said that the angiogram revealed a minor blockage in the coronary artery.

The decision to go for an angiography was taken after Mr. Hazare was subjected to a check-up by a team of doctors at his residence in Ralegan Siddhi in Ahmednagar district.

“He is stable and is expected to be discharged in two to three days,” said Dr. Parvez Grant, chief cardiologist and managing trustee of Ruby Hall Clinic.

Chief Minister Uddhav Thackeray, too, enquired about Mr. Hazare’s health on learning of the procedure.

While the anti-graft crusader’s indefinite hunger strike was considered the set-piece of the 2011 anti-corruption agitation, the impact of his fasts and agitations in recent years has been considerably muted.

Since Prime Minister Narendra Modi’s ascension to power in 2014, the anti-corruption crusader has locked horns with the Union Government over several issues. In 2015, Mr. Hazare had to cancel his proposed foot-march from Wardha to Delhi in protest against the controversial ‘anti-farmer’ clauses in the Land ordinance Bill.

In 2019, Mr. Hazare launched a hunger strike in his hometown Ralegan Siddhi over the appointment of a Lokpal and a number of agrarian issues, including an increase in the MSP for farmers.