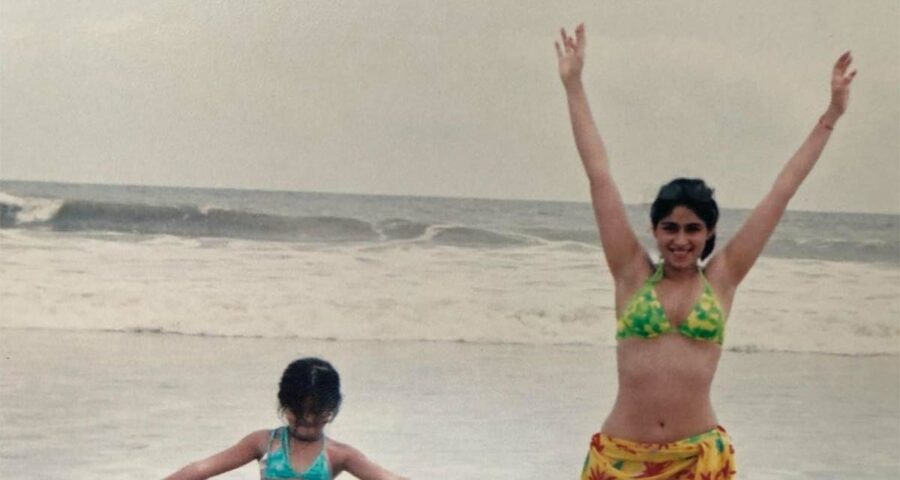 Ananya Panday has made a name for herself in  Hindi Film Industry since her debut. She is known for acting in Student of The Year, Pati Patni Aur Who, Khaali Peeli.  On the occasion of Mother’s day,  yesterday  B town actress Ananya Pandey shared a photograph of  her with her  mom   Bhavna Pandey.  Both mother and daughter  are seen in bikini avatars.  This pic is from Ananya Pandey’ childhood.

Bhavna Pandey is  a popular social media celebrity and costume designer. She hails from Mumbai but completed her college degree from Lady Shri Ram College in Delhi. She worked as an air hostess for some time before meeting actor Chunky Pandey.  Chunky and Bhavana dated for a few years before tying the knot in the year 1998.  The couple has two daughters- Ananya and Rysa.

After the marriage Chunky Pandey and Bhavna Pandey opened a chain of restaurants and in 2018, Bhavna  Pandey launched a brand LoveGen in collaboration with Dolly Sidhwani and Nandita Mahtani.

Ananya Pandeay has a few movies in her kitty at various stages of production. She is also making her debut in  Telugu film Industry with the movie Liger in which Vijay Deverakonda is playing the lead role.