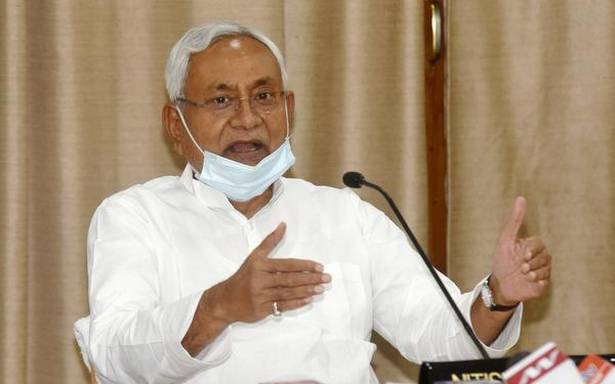 The coup in the Lok Janshakti Party (LJP), culminating in the isolation of Chirag Paswan, son of its founder, Ram Vilas Paswan, is just one of the series of attempts made recently by the Janata Dal (U) and Bihar Chief Minister Nitish Kumar to bolster his party after its below par performance in the 2020 Assembly elections.

Within seven months of returning as Chief Minister for a record fourth time, Mr. Kumar has been trying to put the house in order. The JD(U) won 43 seats (15.39 per cent of the vote share) in the elections, relegated to the third position behind the RJD (75 seats and 23.11 per cent vote share) and the BJP that got 74 seats and 19.4 per cent of votes.

“We did not lose this election, we were tactically defeated by those with us and those against us. The LJP’s campaign, which could not have happened without a tacit understanding of the BJP, defeated 46 of our candidates,” a JD(U) leader said.

While sitting in the driving seat, the BJP expected him to play the second fiddle, a position he has never been comfortable with.

His first step was to put his own house in order. So in December, he appointed RCP Singh in his place as the party’s national president. Mr. Singh belongs to the Kurmi caste. To balance the caste arithmetic, two weeks later, Umesh Kushwaha, a low-key leader, replaced Bhashist Narain Singh as the State president. Mr. Kushwaha belongs to the Koeri caste.

Then Mr. Kumar got down to bringing others into the fold. On January 22, the lone BSP MLA, Mohammad Jama Khan, joined the JD(U). In March, the JD(U) engineered the return of Upendra Kushwaha, a former protege of Mr. Kumar. He had walked out in 2013 to form the Rashtriya Lok Samata Party. In the 2020 elections, where the party fought in alliance with the BSP and the AIMIM, Mr. Kushwaha hurt the JD(U) in 25 seats.

Also Read | LJP row: As you sow, so shall you reap, says JD(U) chief

In April, the lone LJP MLA, Rajkumar Singh, joined the JD(U), taking the BJP by surprise. Mr. Singh had walked out of the BJP to join the LJP ahead of the 2020 polls and the BJP was expecting his return.

“The script that Pashupati Nath Paras read out on Monday was definitely not his own. This is the signature style of Mr. Nitish Kumar, who had, post 2010, tried to break the RJD too. Engineering the LJP coup, Mr. Kumar also wants to send a message to the BJP,” RJD MP Manoj K Jha told The Hindu.

Speculations are on that the LJP split is not the last political event on the cards. The JD(U), sources claim, is talking to the 19 Congress legislators and five AIMIM MLAs too. It wants to be on an equal keel as the BJP, free from its pressure and influences.

Party general secretary K.C. Tyagi, denied any direct role of the JD(U) in the LJP coup. He said his party was doing essential housekeeping. “Our aim and goal is to return to the position we were in 2009 when we won 118 seats, to revive the same acceptability that Mr. Nitish Kumar enjoyed then,” he added.