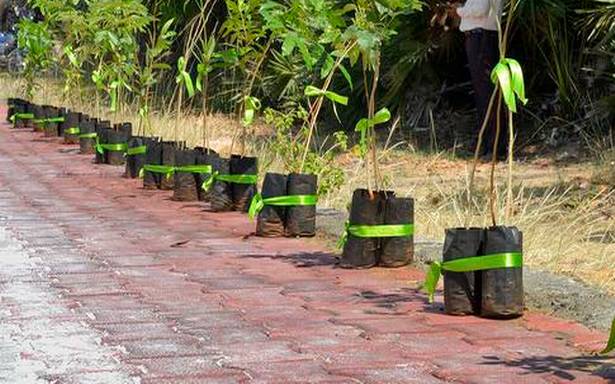 Questions remain on protecting the large number of saplings

While welcoming the recent initiative of the government to plant 75,000 saplings in Puducherry, environmentalists want the administration to put in place a proper mechanism to improve green cover.

The government, at the instance of Lieutenant Governor Tamilisai Soundararajan, launched a programme to plant 75,000 saplings, a majority of them on Forest Department land at Manapet.

Inaugurating the programme early this month, Dr. Tamilisai had given a clarion call to the government to scale up the number of saplings to be planted to 7 lakh in the coming months.

“Planting 75,000 saplings is an excellent initiative. Growing trees help keep the natural ecosystem rolling and displays commitment to ensure a healthy planet for future generations. However, with the planting of a seed or a sapling comes the responsibility of nurturing them. Therefore, it is vital to involve local communities so that they become the guardians of the saplings for two or three years till the sapling grows into a tree,” said Probir Banerjee of PondyCan.

Studies reveal that had all saplings that were planted so far survived, they would have covered four times the country’s area. “Someone should conduct a study here to find the status of saplings planted in the last 10 years,” Mr. Banerjee said.

According to environmental activist K. Ramamurthy, the exercise should not become a mere tokenism. Experience showed that saplings in residential areas and on the roadsides had either withered away or got damaged in a few months.

“It is better to create a separate body, involving government officials, environmental activists, students, and representatives of corporate organisations, to monitor the growth of plants,” he said. Instead of planting trees on the roadside, the focus should be to increase green cover by growing saplings in government offices, educational institutions, on temple land and in poromboke areas, he said.

The former Additional Principal Chief Conservator of Forests P. Devaraj said any success of tree plantation depended on community participation. Reward and punishment should go hand in hand. People should be rewarded for protecting the trees and punished for cutting them down or damaging the saplings.

He stressed on the need to select the species properly. On narrow streets and lanes, tall branching trees should be avoided. Branching of trees at a low height would hinder movement of vehicles. Trees with heavy foliage should not be planted in windy areas as they get uprooted by strong wind.

Deputy Conservator of Forests Vanjulavalli Karthik told The Hindu that planting of 75,000 saplings had been done in a planned manner. “This exercise was more voluntary as several departments and agencies came forward on their own. A majority were planted on our land. So there is no question of them being neglected. We have our staff to take care of the plants,” she said.

Ms. Karthik said the species had been selected carefully. Saplings of fruit trees were given to self-help group members, and those given to the Public Works Department were shade and timber trees.

“Even on our land, we chose forest trees, which are more rain fed. Some of the species do not need watering after six months,” she added.