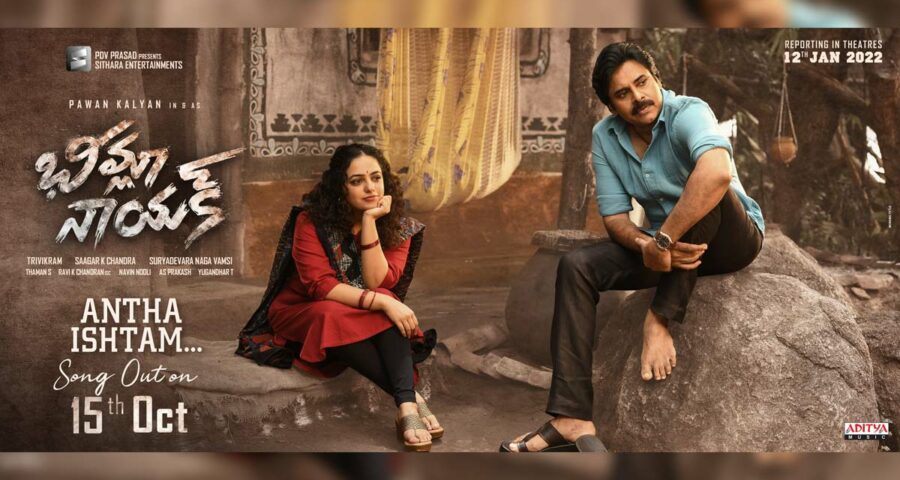 Power Star Pawan Kalyan and Rana Daggubati are currently working together for an upcoming film Bheemla Nayak. The shoot of this action drama is going on at the brisk pace under the  direction of  Saagar K Chandra. Curly haired girl Nithya Menen has been roped in and she is playing Pawan Kalyan’ wife.

On the otherside, Malayalam actress Samyukta Menon will be seen playing the role of Rana Daggubati’ wife in Saagar K Chandra’ magnum opus Bheemal Nayak.   The makers of Bheemla Nayak have  released the first single  which was  a sensational hit  and the fans have been waiting for the second one eagerly.  Now according to the latest update, the makers of Bheemla Nayak is going to release the second song AnthaIshtam on 15th October.

The production house Sithara Entertainments confirmed the same by releasing a new poster on the official Twitter handle. Coming on the poster, Nithya Menen is seen sitting next to Pawan Kalyan and this song could be a romantic number between them.

Bheemla Nayak is bankrolled  by Suryadevara Naga Vamsi under the banner of Sithara Entertainments and it has the music by Thaman. Ravi K Chandran is handling the cinematography and Navin Nooli is taking care of the editing.