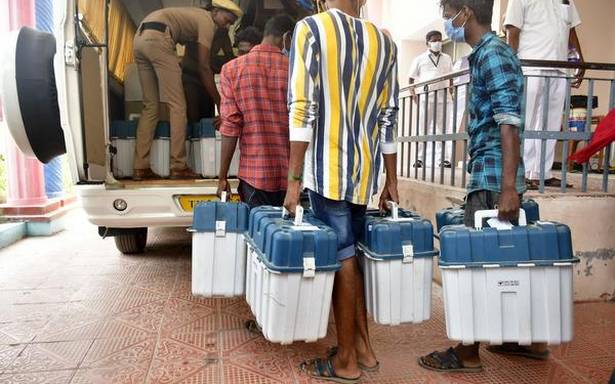 Stage is set for polling in the nine districts in central region on Tuesday with elaborate arrangements being made to ensure smooth poll, with special emphasis on preventive measures against COVID-19.

Polling will commence at 7 a.m. and continue up to 7 p.m. and the last one hour has been earmarked for COVID-19 positive patients and persons with symptoms to exercise their franchise wearing personal protective gear.

Collector- cum-District Election Officer S. Divyadharshini told The Hindu that all arrangements have been made to ensure free and fair poll in the district. Over 15,000 personnel have been involved in the poll duty. The presiding officers and other booth level personnel have already reported for duty at their respective booths. They had been given the responsibility of preserving the Electronic Voting Machines and Voters Verifiable Audit Paper Trail (VVAPT).

She said that 215 zonal parties were formed to transport the EVMs and carry out other poll-related works. They would be on the move in their respective areas to reach the polling stations within 5 to 10 minutes to resolve issues if any.

There were 15 polling booths in hilly areas. Most of them were in Pachamalai. There was no problem in transporting the EVMs and other materials to the booths as all of them were well connected by roads. She had received inputs that presiding officers and polling materials had already reached boots.

She said each polling centre would have a voters’ facilitation centre to assist the voters to identify their polling booths. All voters would be checked with thermometer to see whether they were running temperature. If any voters were found with high temperature, they would be asked to vote between 6 p.m. to 7 p.m..

The Collector said that out of 3,292 polling booths, 156 booths were classified as sensitive booths based on law and order and other issues in the previous elections. The proceedings in 1,490 booths would be monitored with web cameras.