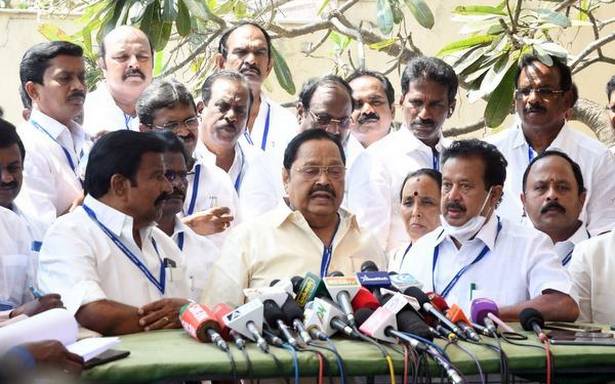 DMK’s deputy leader in the House, Duraimurugan, said the government had failed to provide any financial assistance to the poor and the middle class who lost their livelihoods during the COVID-19 pandemic

“Even as we were staging a walkout, I heard the announcement that the debt had crossed over ₹5.70 lakh crore. This is a shame. The AIADMK does not have the right to rule the State,” said Duraimurugan, DMK’s deputy leader in the House, while explaining his party’s decision to boycott the session.

“Chief Minister Edappadi K. Palaniswami and Deputy Chief Minister O. Panneerselvam have created a financial disaster and crisis for the people of Tamil Nadu,” Mr. Duraimurugan alleged. He charged that while the government had failed to provide any financial assistance to the poor and the middle class who lost their livelihoods during the COVID-19 pandemic, it had called for tenders and shared the spoils with its benamis.

“Now the government is spending ₹1,000 crore for releasing advertisements in the media to project itself as a great saviour. Mr. Palaniswami has emptied the State coffer. He has turned the clock in Tamil Nadu back by 50 years. He and Mr. Panneerselvam are black spots in Tamil Nadu,” he said.

Mr Duraimurugan said that the DMK would capture power in Tamil Nadu with the support of the people and probe into all the financial and fiscal irregularities and repair the State finances.