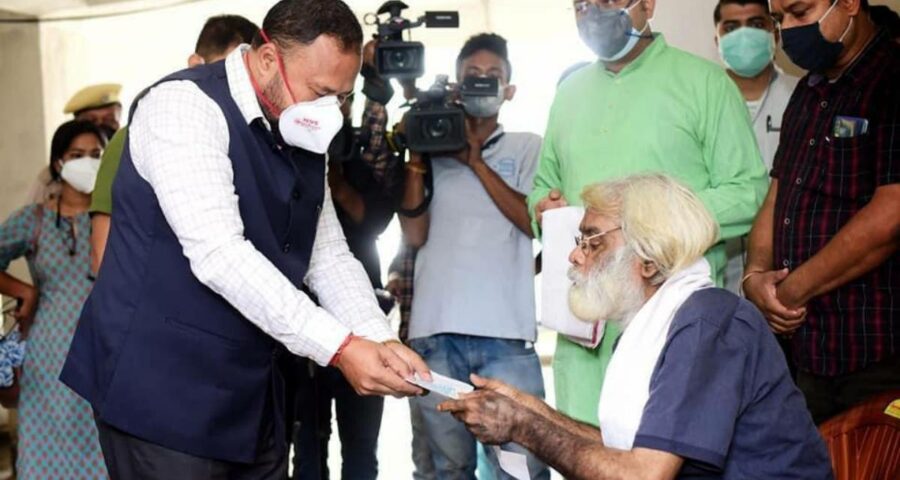 After testing positive for the novel coronavirus, Das, 68, and his wife, Pinky, were admitted to the Gauhati Medical College and Hospital. In the video, which went viral, a helpless Das can be heard saying that no one was attending to them in the hospital. A day after a video of popular Assamese singer, Arun Das, saying he was left to fend for himself while down with Covid-19, went viral on social media, the Assam government presented the artiste an aid of Rs 1 lakh.

After testing positive for the novel coronavirus, Das, 68, and his wife, Pinky, were admitted to the Gauhati Medical College and Hospital. In the video, which went viral, a helpless Das can be heard saying that no one was attending to them in the hospital.

On discovering the video, the members of the Film Fraternity of Assam (FFA) took to social media to highlight Das’s distress. “Someone sent the video on our Whatsapp group — we called up government officials, and put it on Twitter as well,” said Manas Barua, a Guwahati-based filmmaker. Singer Zubeen Garg and actor Pabitra Rabha have also stepped in with aid.

“He did not even have a proper shirt, or sandals — the FFA has provided him with aid, and rations now,” said Barua.

Actor Adil Hussain Wednesday tweeted out the video, tagging the official handle of Chief Minister Himanta Biswa Sarma and Government of Assam: “Please look after this fantastic singer who sang for all of Assam and established our idea of romance in loss and Tragedy! Who sang his grief away to glory.”

In the eighties and nineties, Das was among the state’s most popular singers but gradually disappeared from the scene in the years that followed. “He was a household name and known for his romantic songs…often melancholic,” said filmmaker Utpal Borpujari. His famous songs include Tumi Janu Jana, Atori Atori, Mur Ei Morom.

Das is known to have lived most of his life in penury. “He had applied for the ‘Silpi Pension’ (artiste’s pension) and even received it in 2019. However, he did not physically turn up to claim it again and thus, the pension was stopped,” said Barua. The Silpi pension scheme sanctions a financial grant of Rs 8,000 a month to artistes to recognise their “outstanding contribution in the field of Art & Culture”.

After testing negative for the virus, Das and his wife have been discharged from the hospital and are now reportedly back home — a single room in the basement of an apartment complex in Guwahati. Barua said that it was the security guard’s quarters.

On Wednesday, Bimal Borah, Assam Cultural Affairs Minister visited Das at his home and presented him a cheque of Rs 1 lakh. “We heard about his plight and the Chief Minister directed that we give him Rs 1 lakh from the CM Relief Fund,” said Borah, adding that Das and his wife were better, but still “weak”. “He will continue receiving the Silpi pension,” he added.

Barua said they appreciated the government’s gesture but hoped for a more “permanent solution” especially regarding the singer’s living conditions. “He should be able to lead a life of dignity,” he said.