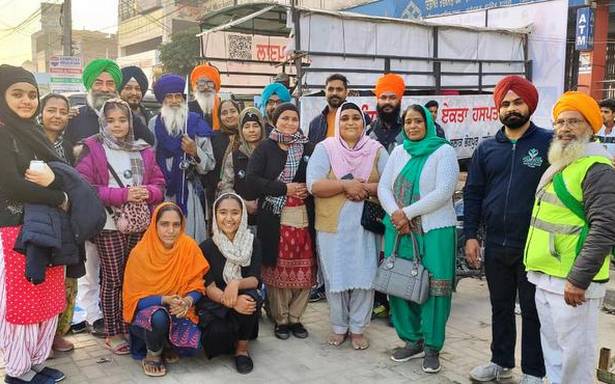 In their village, farmers were accorded a hero’s welcome

Over 10 days after protesting farmers left the Singhu border, those who became the face of the protest haven’t stayed at home. They remained united and served in the recent Shaheed Sabha in Fatehgarh Sahib.

Mr. Avtar said that they’ve all gone home once where they received a grand welcome in each of their villages – with garlands and crowds cheering for them.

“When we went to Baba Santok Singh’s house, we found it to be a modest home with huge cracks in the wall. The man was still with us the whole year and continued to protest,” he said.

Mr. Nachhatar had left the Singhu border on December 15 and had decided to walk back home. It took him nearly 10 days but he reached Ropar on December 24 and then Fatehgarh Sahib the next — along with his close associate Ajeet Pal who was also a known face at the protest site because he and his group were running shoe cleaning langar.

“It was the almighty’s wish that I come back on foot and I did. After serving here, I am finally going home,” he said over the phone.

At Fatehgarh Sahib, the hospital was set up for three days and helped those in need. Other protesters who had reached helped in the langar sewa.

“There were three local nursing staff at Singhu. When they got to know that we are setting up again, they came to Fatehgarh Sahib,” Mr. Avtar said.

Farmers also shared their opinion on the recent formation of the Samyukta Samaj Party by 22 leaders, who were a part of the Samyukta Kisan Morcha. While Mr. Avtar was disappointed, Sukhwinder Singh Barwa, who used to run Sanjhi Satth at the protest site, said this is what the public wanted.

“If you form a political party, you can’t freely hold a protest. The farmer leaders seem to have taken advantage of the protest,” Mr. Avtar said.

Mr. Barwa said, “People want the leaders to form a party to take the cause further than this win”.