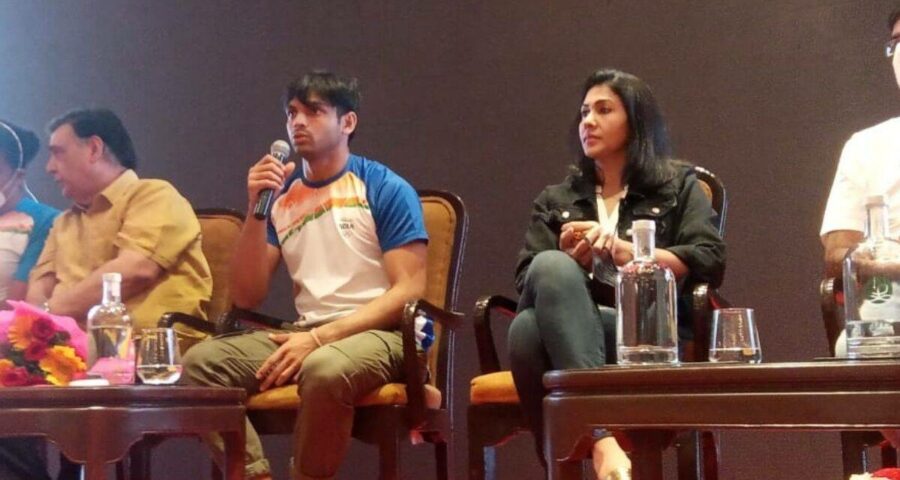 A history-making Olympic gold in his pocket and having won the 2018 Commonwealth Games and Asian Games titles, star javelin thrower Neeraj Chopra is now targeting a top podium finish in the World Athletics Championships to be held in USA next year.

The World Championships was to be held this year in Eugene, Oregon, in US but was pushed to 2022 after the 2020 Tokyo Olympics was postponed by one year due to the COVID-19 pandemic. It will now be held from July 15-24, 2022.

“I have already won gold in Asian Games and Commonwealth Games and now an Olympic gold. So my next target is winning gold in the World Championships next year,” Chopra said during a press conference arranged by the Athletics Federation of India (AFI) to felicitate him on his Olympic gold-winning feat. Chopra scripted history on Saturday in Tokyo when he clinched India’s elusive Olympic medal in athletics to become only the second Indian to win the yellow metal in an individual event with a best throw of 87.58m in the final.

“World Championships is big a competition and sometimes tougher than the Olympics. I am not going to be content with this Olympic gold and sit on this laurel. I would like to do even better and win gold again in Asian Games, CWG and again in Olympics.”

The 23-year-old superstar also felt that his inclusion in the national camp by AFI in 2015 despite finishing fifth during the National Games in Kerala was a turning point in his career. Before joining national camp in early 2015, he was training at Tau Devi Lal Stadium at Panchkula after being shifted from Shivaji Stadium at Panipat.

“We did good training but the facilities, equipment, diet were not that good (at Panchkula) but once I joined the national camp (at NIS Patiala) everything changed. “I got better facilities, better diet and equipment only after joining national camp. And the most important thing is the feeling that I am training along with the best javelin throwers of this country. That is a different feeling. “So, joining the national camp changed my career and I want to thank the AFI for that.”

He said having got all the requirements and facilities he needed it was for him to work hard which he did. “So, I got everything I needed, so I worked hard and I am now here.”

Lalit Bhanot, the Chairman of Athletics Federation of India’s (AFI) Planning Committee, on Tuesday said they will stage javelin throwing competitions every year on August 7. “Athletics Federation of India’s planning committee has decided to further promote javelin throwing and will hold competitions every year throughout the country on August 7 as Neeraj Chopra won the gold in Tokyo on this day,” Bhanot said in a felicitation program organised for Neeraj Chopra by the AFI.