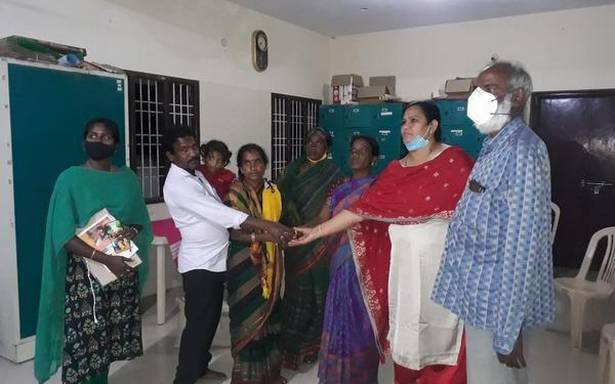 Nearly a year after a 30-year-old woman from Maharashtra was rescued in the city and accommodated in a home, she was reunited with her father on Saturday. Sangeetha was found wandering at Mannarpuram here on January 16 last year and the Cantonment police upon noticing the woman brought her to Anbalayam Home for the mentally ill where she was accommodated.

The woman was in a mentally disturbed state when she was rescued and could not convey anything clearly when inquired except for her name, says T. K. S. Senthilkumar, the founder president of Anbalayam Home. The woman was given food and shelter at the home and also psychiatric treatment. The woman had initially said she had mistakenly alighted in Tiruchi while coming on a train from Ariyalur. This prompted the volunteers at the home to carry out a search in that town in a bid to trace her near ones.

However, the efforts did not yield any results. A few months later, the woman began to show good improvement and disclosed that she hailed from Solapur and that she had a male child. She told the volunteers of her desire to return home and see her child. However, she could not be taken to Solapur owing to suspension of train services due to the lockdown imposed in the wake of COVID-19 pandemic, Mr. Senthilkumar said.

Subsequently, one of the volunteers by name Gautham who knew Hindi got in touch with the Solapur police seeking their assistance in tracing the whereabouts of Sangeetha’s relatives and sent the photograph of the woman through WhatsApp. This move clicked and Sangeetha spoke to her husband’s brother staying at Solapur, her three-year-old child and relatives through WhatsApp video call recently, said Mr. Senthilkumar. The relatives of Sangeetha conveyed the information to her father Lakshman who works in a poultry farm near Pollachi. Lakshman began to speak to Gautham thereafter.

Mr. Senthilkumar further said the woman and her husband Shivaji were working as labourers in Ariyalur from where the woman went missing. Her husband had searched for his wife and had returned to Maharashtra unable to trace her. The woman thereafter reached Tiruchi where she was rescued.

It was an emotional moment, when the rescued woman was finally reunited with her father and stepmother after necessary checks were conducted when they came to take her back. Sangeetha called up Anbalayam on Sunday morning to inform them that she had reached Pollachi, Mr. Senthilkumar added.