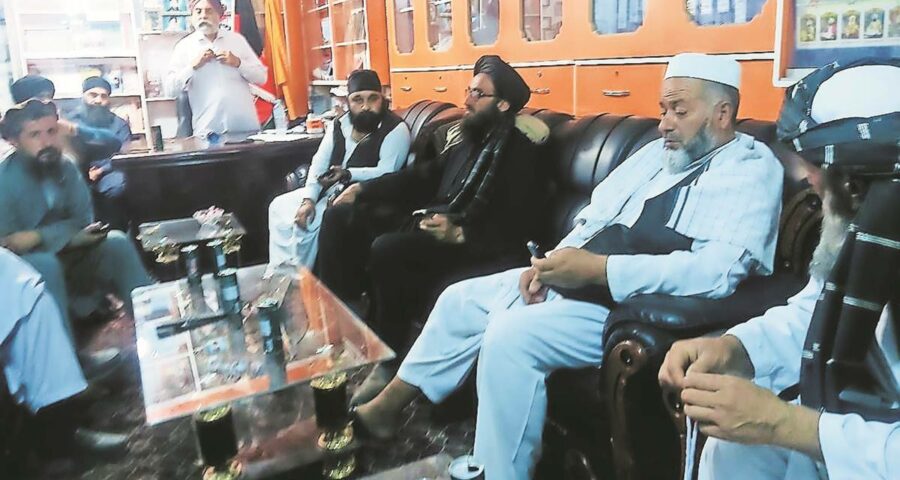 After the meeting, representatives of the Sikh community said that they were assured of “peace and safety” by the Taliban. Amid lingering uncertainty over safety and future of minority Sikh and Hindu communities in Afghanistan, the Afghan Sikh community Monday held a meeting with Taliban representatives in Kabul.

After the meeting, representatives of the Sikh community said that they were assured of ‘peace and safety’ by the Taliban.

Speaking to The Indian Express over phone from Kabul, Gurnam Singh, president, Gurdwara Dashmesh Pita Sri Guru Gobind Singh ji Singh Sabha Karte Parwan, said that nearly 300 persons including 280 Sikhs and 30-40 Hindus had taken shelter at the Karte Parwan gurdwara since Taliban started taking over provinces of Afghanistan. “But a meeting was held today which was attended by representatives of the Taliban and members of Sikh community. Taliban leaders have assured our safety and peace. They said we need not flee our country and can continue to live here peacefully. They have promised that we can practice our faith and there will be no interference with our religious practices. They have also given a number on which we can contact if there is any issue,” said Gurnam Singh.

He added that Sikh and Hindu families living in Jalalabad and Ghazni, have also arrived in Kabul and all of them were now taking shelter at two gurdwaras — Karte Parwan and Gurdwara Mansa Singh ji — both in Kabul.

On March 25, 2020- an Islamic State (IS) gunman stormed inside Gurdwara Har Rai Sahib in Shor Bazaar of Kabul killing at least 25. There were less than 700 Sikhs and Hindus in Afghanistan during the 2020 attack (including 50 Hindus) and since then at least 400 of them have already migrated to India in different batches.

“Now there are just 280 Sikhs and a few Hindus stuck there. Around 400 of them have already come to Delhi after the 2020 gurdwara attack,” said Chhabol Singh, member of Karte Parwan gurdwara and now living in Delhi with his family.

However, despite the fresh assurance from the Taliban that Sikhs and Hindus would be safe in Afghanistan and need not flee, the local members of Sikh community are all ready to leave their motherland because of grim reminders from the past (during Taliban rule from 1996-2001) and incidents such as Taliban men spitting on faces of Sikhs, asking them to convert to Islam, asking Hindus to wear tilak on foreheads, not allowing women to move out of their homes.

While the Sikh community in Afghanistan is currently silent over the treatment meted to them during previous Taliban rule, they say they are looking for an opportunity to leave as soon as possible — be it India, Canada, the US or any other country.

“Flights have been stopped and we do not have any other option currently other than living here till we aren’t evacuated. For Sikhs, life has never been a bed of roses in Afghanistan, be it under the Taliban or under democratic governments. The two worst attacks happened during President Ashraf Ghani’s rule…Here the comparison is not of good and bad, but bad and the worse. But yes, now we do not want to rake up old incidents during previous Taliban rule because that would cause more troubles for us. We hope that the Taliban will stick to its promises this time. But most of Sikh and Hindu families now are ready to leave. Our luggage is packed. We are just waiting for India or any other country to evacuate us,” said a Sikh man, to The Indian Express from Kabul, requesting anonymity.

He added that most families who were left behind even after the 2020 gurdwara attack, was just due to their compulsion as they had no money to afford tickets to Delhi and even if they reached Delhi, some returned to Kabul again as they could not get any livelihood or had no money to start a business.

“Who wants to leave one’s own home? No one likes to leave their own country. Wherever we will go now, we have to start our lives all over again from scratch but the Taliban is not the one to be trusted. So we want to leave. Some families could not migrate even after last year’s gurdwara attack because they had no money. They are very poor. My wife and children are in Ludhiana but I cannot leave Kabul because I earn here. Who will give me work in India? Some families who went to Delhi last year have returned again because they could not settle in Delhi due to lack of employment. Now what’s their fault if the Taliban has returned? Where should we go?” he questioned, adding that many Sikh men are living alone in Kabul with their families in Ludhiana, Delhi etc.

“They return to Kabul because our businesses are here. It is not easy to find work in Delhi,” he says.

“Till there are no flights, no plan and no money… we have to live under them,” said a Sikh community leader.

Reacting on the situation, Punjab CM Captain Amarinder Singh in a tweet wrote, “Urge @DrSJaishankar, MEA, GoI, to arrange for immediate evacuation of all Indians, including around 200 Sikhs, stuck in a Gurudwara in Afghanistan after the #Taliban takeover. My govt is willing to extend any help needed to ensure their safe evacuation. @MEAIndia.”

Afghan Sikhs and Hindus remember that during previous Taliban rule from 1996 to 2001, there were strict instructions to Hindu and Sikh shopkeepers that they should not entertain any woman customer if she was not accompanied by a male. They were also asked to ‘convert to Islam’ often. Sikh and Hindu women were asked to put ‘bindi’ on their foreheads and wear burqa or some other cloth to cover their upper bodies properly.

One such incident recorded in the book ‘Afghan Hindus And Sikhs- History of A Thousand Years’ authored by Inderjeet Singh, reads, “…The original Taliban were from the Kandahar region of Afghanistan. However, they were people from Pakistan and Saudi Arabia within their ranks as well. These Taliban (not Afghan ones) would spit on the road at the sight of the Sikhs. The Sikhs wore a distinct style of turban and most of them would tie their beard, unlike the natives…the Sikhs were disgusted at their behaviour but tolerated it as they were the minuscule minority and the Taliaban had guns with them..”

However, there was an incident that Afghan Sikhs recall, when the Taliban men instead of spitting on the road, spat on the face of a Sikh man in Tanda Bazaar of Jalalabad.

“The Sikhs were running their shop when a group of Taliban guards entered the bazaar and as usual one of them spit at a Sikh who was standing outside his cloth shop. Rather than spitting on the ground which was the norm, this Taliban spat on the face of the Sikh shopkeeper. Thir infuriated the Sikh… He pulled his metre rod (used to measure cloth) and hit Taliban on his head. The guard was not expecting such a reaction and after recovering from the shock, he and other guards pulled up their automatic rifles at the Sikh shopkeeper. By this time, the other Sikh traders from nearby shops gathered at the site and they scuffled with the Taliban guards and grabbed their files. The Taliban ran away and Sikhs started shouting ‘Jo Bole So Nihaal Sat Sri Akaal’..The matter was reported to the local Taliban chief (who was an Afghan) who disapproved spitting.”