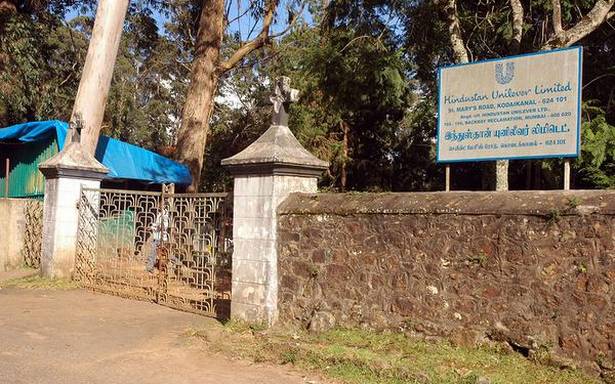 Hindustan Unilever Ltd (HUL) illegally chopped down more than 300 trees from four acres at its defunct mercury factory in Kodaikanal, and that has exposed the toxic soil at the plant site to erosion by rainwater and wind, according to the Chennai Solidarity Group.

The activist group released Google Earth images of the site from March 2018 and January 2020 to show the cutting down of the trees. They said at least 100 kg of soil-bound mercury was likely to have been washed off into the eco-sensitive Pambar Shola section of the Kodaikanal Wildlife Sanctuary.

“This clear-felling is a reckless move that will allow Unilever to clean-up its site by poisoning the Wildlife Sanctuary and the Vaigai catchment. The Forest Department and the TNPCB stand exposed as incapable of protecting the sanctuary and environment,” said Nityanand Jayaraman of Chennai Solidarity Group.

Mr. Jayaraman said as per the Upscaled Remediation Plan approved by the TNPCB in 2018 and a soil conservation study, no tree should be felled and steps need to be taken to ensure that standing trees are not destabilised due to excavation of contaminated soil. He alleged that the violation was supervised by NEERI that was deputed onsite to ensure that the remediation goes as per the plan prepared by it.

However, HUL refuted the charges and said, “Only a minimum number of trees have been cut. Once remediation is complete, we will plant more trees than what we have had to cut. This seems to be another attempt to spread misinformation and delay soil remediation.”

“Trees were cut down only after HUL obtained the necessary permissions from the Dindigul District Hill Area (Preservation of Trees) Committee, chaired by the District Collector, and the District Forest Officer in October 2019 and December 2019, respectively. This was in line with the recommendation made by the TNPCB and the Scientific Experts Committee constituted by the Supreme Court Monitoring Committee earlier that year, for tree removal in the area requiring soil remediation. Additionally, HUL constructed soil retaining walls, silt settling tanks and silt traps to ensure there is no discharge of contaminated soil outside of the factory premises,” the spokesperson said.

Further, the company has already planted 500 trees at the nearby Mother Teresa University, the spokesperson said.