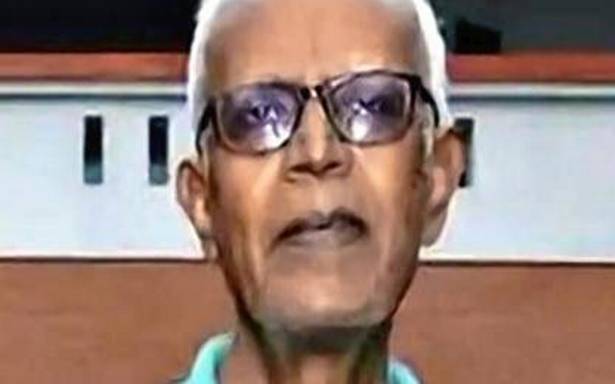 He was produced before Bombay High Court via video-conferencing

Father Stan Swamy, 84, was on Friday produced before the Bombay High Court through video-conferencing.

“I was brought to Taloja jail eight months ago and, since then, there has been a slow regression of my body. I can’t write now, can’t go for a walk, can’t eat, someone has to hold the spoon for me,” Fr. Swamy told the court.

“I was brought here eight months ago. When I came here, my full system, my body was very functional. But during these eight months, there has been a steady but slow regression of my bodily functions. So the main issue is eight months ago I could take bath by myself and do some writing by myself. But these are disappearing one after another. Taloja jail brought me to a situation where I can neither write nor go for a walk by myself or eat. I am not able to meet this demand. Eating is also a difficulty. Someone has to feed me with a spoon,” he told a Division Bench of Justices S.J. Kathawalla and S.P. Tavade

The Jesuit priest went on to speak in a frail voice, “I am asking you to consider, why and how this regression of myself happened. Like yesterday, I was taken to J.J. hospital and so there were a lot of people but I had no opportunity to explain what I should be given. There are some medicines which the jail authorities have given me, but this, my deterioration, is more powerful than the tablets they are giving me. So, I have come to you. Before, I used to put on my earphones and I was able to follow any conversation. Now, I am not able to.”

Justice Kathawalla then asked Fr. Swamy, if he would like to be “admitted to Sir J.J. Hospital for a few days to improve his general health conditions.”

Fr Swamy said, “I do not want to be admitted to J.J. Hospital. It’s a very difficult moment for me. I am eating less and less and my co accused are worried about me. I would prefer to suffer and die like this in Taloja jail than being admitted to J.J. Hospital. It will not improve, it will keep on be going. Only one thing that I would request the judiciary is to consider for interim bail. That is the only request.”

The court then recorded the report submitted by J.J. Hospital after examining Fr. Swamy and said, “He has been treated for occasional loose stools, lower back pain, bilateral hearing loss. We have observed that he has severe hearing problem. He is unable to hear even the person sitting next to him. He could hear only when the person sitting next to him conveyed. He does not want to be treated at any hospital. He insisted that he should get interim bail.”

The court directed Taloja Jail to strictly follow the recommendations of the J.J. Hospital committee and adjourned the matter to July 7.