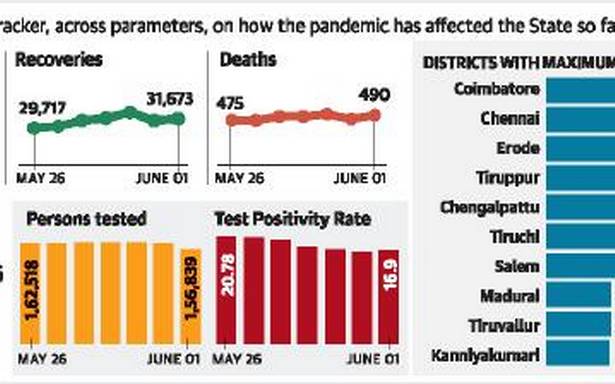 The State’s daily COVID-19 case count dipped to 26,513 on Tuesday, bringing its active caseload below the 3 lakh-mark. However, the toll due to the infection remained high, as 490 more people, including a 105-year-old woman, succumbed to it.

Of the 490 deaths (198 in private hospitals and 292 in government facilities), Chennai recorded 58. There were 50 deaths in Chengalpattu, followed by 32 in Coimbatore. There were 26 deaths in Tiruvallur, 21 in Tiruchi and 20 each in Cuddalore and Dindigul.

The 105-year-old woman from Thanjavur who died had systemic hypertension and was admitted to a private hospital on May 25 with cough and loose stools for two days. She died on May 31 due to COVID-19 pneumonia.

Six people in their 20s succumbed to the infection. This included a 24-year-old woman from Coimbatore with gestational hypertension. She was admitted to the Coimbatore Medical College Hospital on May 28 and died on May 30 due to COVID-19 pneumonia. A total of 111 of the deceased did not have co-morbidities.