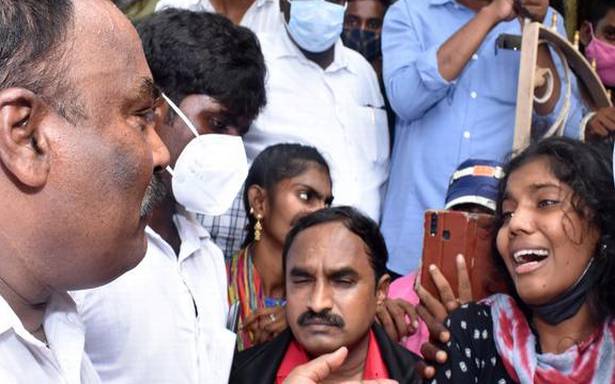 The accused in the murder of third year engineering student Nallapu Ramya tried to kill himself with a blade after committing the crime, the Guntur Urban Police said on Monday.

Kunchala Sasikrishna, 19, who was arrested on Sunday, has been booked under Sections 302 of the IPC, Sections 3 (2) of the Scheduled Caste and Scheduled Tribe (Prevention of Atrocities) Act. The Disha police are investigating the case.

DIG (Guntur Range) S.V. Rajasekhara Babu and Guntur Urban SP K. Arif Hafeez and Rural SP Vishal Gunni presented the accused before the media on Monday. The accused was taken into custody at Narsaraopet. He tried to kill himself with a blade and the police sent him to the GGH. The police have seized the weapon used by the accused, the police said.

“The accused met Ramya on Instagram two months ago and befriended her. The accused had been harassing her. On Sunday, the accused went to house of Ramya and both drove away. In an hour, Sasikrishna dropped Ramya near her house and both had an altercation. In a fit of rage, Sasikrishna allegedly stabbed Ramya on her throat, chest and on the thighs, in broad daylight. CCTV cameras captured the crime,” Mr. Rajasekhara Babu told the media. A woman tried to intervene, but the accused flashed the knife and fled.

The police identified the accused based on the inputs provided by the family members of the student. Even as he had switched off his cellphone, the police tracked his movements and arrested him at Narsaraopet.

Mr. Rajasekhara Babu congratulated the Guntur Urban and Rural Police. He said that investigation would be expedited under the Disha Act.

Earlier in the day, Home Minister M. Sucharitha, accompanied by Vemuru MLA Meruga Nagarjuna, MLC Lella Appireddy and District Collector Vivek Yadav, visited the Government General Hospital (GGH) and consoled the family members of the student. Ms. Sucharitha handed over a cheque for ₹10 lakh as ex gratia to the family members of the victim. However, they demanded that one member of the family be provided with a government job. The Home Minister assured that their demand would be taken to the notice of Chief Minister Y.S. Jagan Mohan Reddy. Later, the body was shifted to her house.