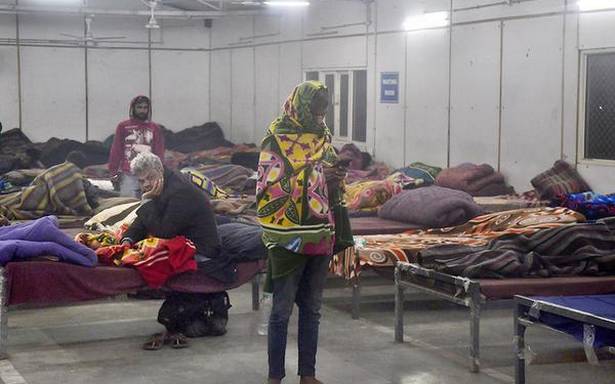 Prior to arriving at a shelter for homeless women in Delhi’s Karol Bagh, Anita Gangwar worked as a teacher in Bareilly. Anxiously picking her nails, Ms. Gangwar said that a string of disputes at work and within her family led to a severe mental breakdown after which she fled to Delhi where she was rescued from the streets in 2019.

At a recovery shelter for women in the city’s Kabir Basti, 65-year-old Munish Rani struggles to settle in the space as she fondly recalls her daughter. “I don’t live with her because her husband’s family has a problem with me. I moved to this shelter close to four months ago. This was after my eyesight weakened and the hospital authorities referred me here because I had no one to take care of me,” she lamented.

Speaking to The Hindu, many of the homeless who have taken to shelter homes in the city, gave an insight about their past with most stating that they were either abandoned by their family members or victims of domestic abuse, which has led to severe mental ailments.

Chitrarekha, who manages the shelter at Kabir Basti, said that most of the middle-aged women who were rescued and brought to the facility were abandoned by their family members.

“At first, they are very hostile because they are not familiar with living at shelters and it takes them a long time to settle in. There are also cases where some of the homeless women get violent because of their past experiences of being ill-treated. We provide them with counselling and medication but they take a long time to recover because they are suffering from trauma, inflicted due to domestic abuse and abandonment, in most cases,” she said, adding that rarely had she seen any of the homeless women returning to their families

Rajni Singh, who also manages the Karol Bagh shelter, said that while most of the homeless are spotted around places of worship and railway stations in the city, it takes multiple efforts to convince them to move into shelter homes because of “lack of trust”. Pointing towards an elderly homeless woman at the facility, she said, “We call her ‘Kamala Amma’ and she has been here since the shelter was started more than a decade ago. Kamala believes that her son will come back for her, but we know that is not the case.”

“The homeless are worried about being exploited because they have lived in harsh conditions. The average age group that we have noticed in these cases are between 30 years and 65 years and most of them are migrants from other States. Some of them also come from financially sound families, but there is domestic abuse involved in these cases. They manage to get out of the situation but land up on the streets instead,” she said.

According to Sanjay Kumar, who has worked towards the betterment of the homeless for over two decades through his organisation Aashray Adhikar Abhiyan, the prime age group of the homeless, that he has identified over the years, stands between 26 years and 35 years. “Roughly, 40% of the homeless are from this age group, while those between 36 years and 45 years make up for close to 30%. On a structural level, poverty, migration and unemployment are prime factors which lead towards homelessness. However, there are cases such as those who come out of prison and try to lead a new life. There are cases of long-term illness, disability and drug addiction where the family does not want to take care of the affected individuals,” he said.

While the shelter at Karol Bagh, managed by Aashray Adhikar Abhiyan, provides regular sessions of counselling along with vocational and skill training, the requirement of similar provisions remains lacking, according to caretakers and managers, at other shelter homes in the city.

“In most instances, the mental health issues that these women suffer from, who are mostly abandoned by their families, cannot be treated completely and some residue is left behind. While there are some shelters which are pretty good, there are a lot of places where care is not taken in the required manner and they end up coming back to hospitals. It is a revolving door which keeps repeating,” said Anita Verma, an independent psychiatrist.