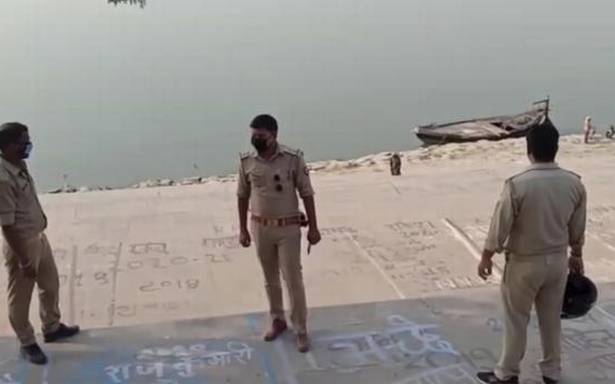 Given the large number of bodies, the police are probing if they are of COVID-19 victims but have so far not been able to either identify the deceased or trace the source.

At least two dozen bodies in a decomposed condition were found floating in the Ganga in Ghazipur district of Uttar Pradesh on May 11, the police said.

Given the large number of bodies, the police are probing if they are of COVID-19 victims but have so far not been able to either identify the deceased or trace the source.

Jamania DSP Hitendra Krishna told The Hindu that 23 to 25 bodies in a “semi-decomposed” state were found floating near the banks of the Ganga in Gahmar circle of the district.

The bodies were retrieved and disposed of on the banks of the river, he said, estimating that the deaths could have occurred around 10 to 15 days ago.

Mr. Krishna said police were unable to identify the bodies or trace their source. However, he said it was found that they did not have a local source and could have flown down from other districts.

”We spoke to the locals and found out that they had performed the final rites of all the bodies that were brought to the ghats. The local Muslims too had buried their dead,” he said.

While Mr. Krishna said it was difficult to ascertain if the bodies were of COVID-19 victims, he stated he had never seen so many bodies floating like this in the region.

The officer said that since many deaths due to COVID-19 were reported in other cities close to the Ganga, there was a long waiting line at cremation grounds. “It is possible that in hurry some disposed off the bodies in the river like this,” he added.

Balwant Singh, the newly-elected head of the village Gahmar, which is one of the largest in the country, said the administration had sprayed lime to clean the area where the bodies were found and disposed. Mr. Singh said the bodies did not belong to the village. and rued that they were being linked to his village only because they were discovered close to it.

“The villages where the bodies are seen sticking to the banks are getting defamed,” he said.

Circle officer of Saidpur said no body was in his area while circle officer City Ghazipur circle did not take phone calls.

The district magistrate on May 10 said the authorities were trying to find out where the bodies had from to Ghazipur and also their exact count.