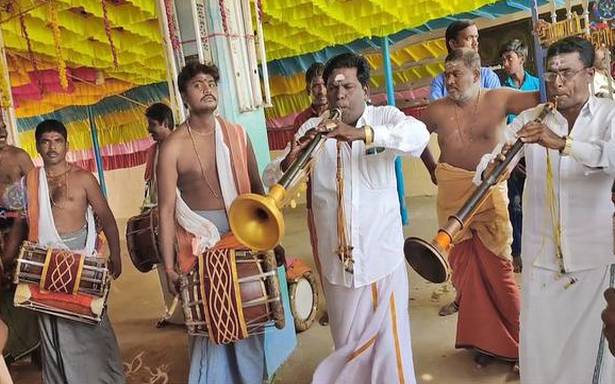 The song may be nearly four decades old, but its nuanced use in recent films has given it a new resonance among the oppressed classes.

As the heroine enters in Karnan, the latest Dhanush starrer, playing in the background is ‘Poraadada, Vaalenthada,’ played on the nagaswaram, accompanied by ‘naiyaandi melam’. The film’s director, Mari Selvaraj, seems to be enchanted by this song. He had also used it in his previous work, Pariyerum Perumal. Originally composed in 1983, for the film Alai Osai, in which actor Vijayakant played the lead role, the song has now become an anthem of sorts for Dalits; and the voice of those who stand up against oppression. Mari Selvaraj’s film has actually captured the song’s popularity among Dalits in the southern districts of the State. The song is also featured in marriages.

“In the past, there used to be a request from the audience to play it once or twice. Now I don’t know how many times I play it during a temple festival (kodai). Another ‘naiyandi melam’ player told me that he had played it 50 times in a temple in Kanniyakumari district in three days,” said ‘naiyandi melam’ artiste and nagaswaram player Panakudi Siva.

The audience, particularly the youth, will make a beeline to offer money to the nagaswaram player before requesting him to render the song. In Karnan, the tune was played by the troupe of Ramanathapuram-based P. Marungan, one of the leading ‘naiyandi melam’ artistes. He and his troupe also played for other songs in the film. One can listen to him and other troupe playing ‘Poraadada’ on YouTube.

Asked about the song’s popularity, Ilayabharathi, the poet who penned it, said he was happy that it had struck a chord with the people. “Even after four decades, its message seems to be evergreen,” he said, while acknowledging the opportunity given to him by music director Ilaiyaraaja and film director Sirumugai Ravi to write the song.

But performers should be careful about playing the song in the temples of other communities, where it may not be taken lightly, because in its ‘saranam’ there is a reference to Dalit communities. “One of my friends was let off with a warning for playing the song in a temple run by caste Hindus. But it will not happen in all places,” recalled Mr. Siva.