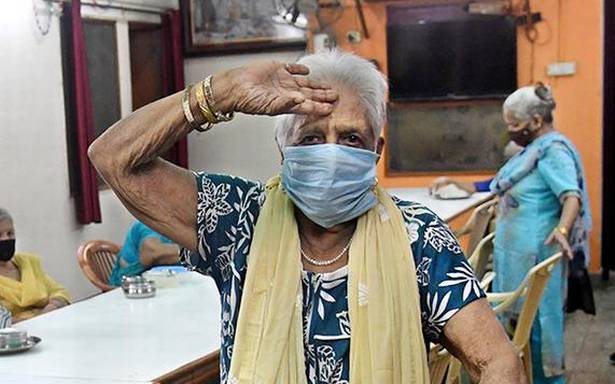 Inmates at the city’s old age centres have been among the worst-affected victims of COVID-19. Confined to the premises with no visitors in months, the senior residents are giving up on the only strength that keeps them going — the hope to see their loved ones

It’s been over 12 years since Kiran Bhandari, 70, has been living at ‘Gharonda’ old age home. She doesn’t wish to live any more, a feeling that has only become stronger since the COVID-19 outbreak last year.

Like Ms. Bhandari, there are 27 other senior citizens living here in this double-storey home with twin sharing rooms and a sprawling garden area located on a narrow street in South Delhi’s Fatehpur Beri. At least 20 others are currently back with their families because of the pandemic.

The inmates at the home come with a load of emotional baggage, memories of a life spent with family and fear of being forgotten by all. The pandemic has only made matters worse.

Ms. Bhandari still wears bright red vermilion. She is hopeful that her husband would return one day but somewhere inside, she knows he might not. “I am just waiting to die. I have lived alone for so long. What’s the point of it? I have a phone and there’s no one to talk to,” she said.

Her husband — who was under heavy debt — disappeared one day about 13 years ago, leaving her alone in a rented house in Mahipalpur. She knocked at door of her mother-in-law who turned her away. Her own brother also didn’t take her in. After spending a year at an ashram in Ballabhgarh, she was told about this old age home where she has now been staying. “All I pray to God is to let me leave the world from here only. I don’t want to go to another old age home,” she said.

The last one and half years have been very tough for Ms. Bhandari. Kamlesh Malik, whom Ms. Bhandari takes as her mother at the home, had gone back to her own family in Rohini for 10 months. She returned only three weeks ago after losing both her sons in a span of three months.

Ms. Malik hesitated to share what transpired before she moved into the old age home. She cried, not for being abandoned by her family but for the demise of her two sons.

Ms. Bhandari recalled: “The last few months were very tough, especially without mummy [referring to Ms. Malik]. Every time I watched news and heard about people dying, I just wished to be gone in this wave.”

Ms. Bhandari saw a sister in Usha Goyal, 75, and a brother in 64-year-old Kishan Lal. “Ab to yahi ghar wale hain… inhi se baat karke time nikal jata hai [Now, this is my family and time goes by talking to them]”.

An inmate who refrained from following news was Mr. Kishan. He said he stopped watching TV because it troubled him. He said he didn’t miss stepping out much because he usually stayed indoors. Mr. Kishan spends his day helping in daily chores, serving meals and taking care of his roommate – his namesake Kishan Lal, 86.

Mr. Kishan had come here seven years ago from Haryana’s Rewari. A heart patient, he suffered two heart attacks and his medicines cost ₹7,000 a month — an amount his son wasn’t capable or willing to bear. His wife still lives with the son and he visits them occasionally.

“My heart only works at 25% capacity. I don’t have the courage to deal with any problems anymore. I used to meet my wife and my son before the pandemic outbreak. It stopped after that,” he said.

Talking about his roommate and namesake, the octogenarian Kishan Lal, Mr. Kishan said his son is differently abled and his wife works as a house help in East Delhi. As she was unable to take care of both of them financially, Mr. Lal had to come here eight years ago. He doesn’t have teeth and has trouble walking. His digestive system is weak and he lives only on fluids. “It’s tough to see him like this,” the younger one said.

Since February 2020, when COVID-19 pandemic first hit the country, the octogenarian’s family has not come to see him. Others aren’t sure if he even waits.

For Usha Goyal, life during the pandemic has been full of fear of being stuck outside the old age home. On the day the lockdown was announced in March last year, Ms. Goyal was visiting her daughter in Moti Nagar. She ended up staying with her for the next five months till the unlock phase began.

Ms. Goyal came to this home 15 years ago with her husband Raghuvir Goyal. Raghuvir passed away after suffering a heart attack 12 years ago. She had three daughters — two of them passed away a few years ago.

She also has a son she doesn’t want to remember him. “I don’t know where he is and I don’t want to know it either.” Her expressions change from calm to angry just at his mention. He is said to have left his family in his early 20s when they used to live in a rented house in Paharganj.

The last few months have made her feel lonelier but she is okay, she said, spending her time listening to radio, watching TV, sitting in the garden and talking to the rest of the inmates.

The most loved one

The most impacted by COVID-19 and also the most loved inmate at the home is Gurucharan Singh Bhatia, 88. He was the first resident of this old age home in 2000. “His health has deteriorated a lot in the last year and a half. He doesn’t remember much now and also talks about things nobody understands,” said caretaker Sunil Bishwas, 58, who has been working here since the opening of the home.

Mr. Bhatia used to be handle the patients at the clinic located in the front porch of the old age home. He would hand out prescription slips and take details of the visitors. However, now, he is incapable of any of it. But the caretakers and owners let him sit at the clinic and work in whatever capacity he can so he doesn’t feel left out. “He was a social person and COVID-19 meant social distancing. It clearly had an impact on his mind,” Mr. Bishwas said.

Mr. Bhatia clearly remembers he was born in Sialkot in Pakistan and during the Partition, he moved to Muradabad. No one has visited him in the last 21 years. His wife is believed to be dead. A man so active once upon a time, now mostly prefers to sleep.

The owner of the old age home, Pravesh Jain, a businessman based in South Delhi who runs a trust — Paras Foundation, said the reason behind running this home is his father.

“My father would look at old, homeless people and worry about them. After he passed away, I decided to turn this place into an old age home. And I run it like my own house and treat the elderly residing here like my parents. I try to take care of all their needs – from food to medicines,” he said