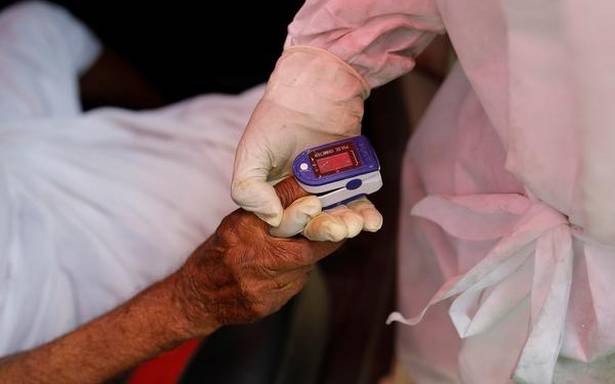 There seems to be an absolute shortage of pulse oximeter, the tiny equipment used to determine oxygen level in the blood, in Kerala, also leading to a steep rise in its prices across districts.

Falling of oxygen levels in blood is a major reason for death of COVID-19 patients. Those tested positive for SARS-CoV-2 along with suspected patients have been advised to use the meter to measure the oxygen levels regularly and seek medical help if their condition worsens.

Rajesh Pillai, State functionary, All Kerala Scientific and Surgical Dealers’ Association, said that the wholesale dealers had exhausted their existing stock and fresh ones were yet to arrive. “We purchase pulse oximeters mainly from New Delhi and Mumbai. By April second week, there was a surge in COVID-19 cases in those places, resulting in a high demand of the meters there for personal use. So the arrival from there stopped gradually,” he said.

Mr. Pillai said that the dealers had been trying for advance booking of the product to meet the demand, but were yet to get any confirmation from the manufacturers.

This also led to a shooting up of their prices. T.P. Faisal, a social activist associated with the Government Medical College Hospital, Kozhikode, said that from between ₹ 600 and ₹ 700 some time ago, the meters are now costing between ₹ 1,500 and ₹ 4,000. “We don’t know if some suppliers are indulging in blackmarketeering,” he said. With the State government instructing ward-level rapid response teams to keep at least 10 pulse oximeters ready with them, local bodies too are a desperate lot.

Mohammed Koya, a medical representative from Perumanna in Kozhikode, said efforts were being made to import the equipment from China. Medical store owners say that they normally don’t stock them up as the meters were normally not in high demand. Some of them had to sell off the stock before April at a low price.

Mr. Pillai said that the dealers were purchasing the meters in a price range between ₹ 1,500 and ₹ 1,800. The retail price would thus go up considering transportation charges, he added.