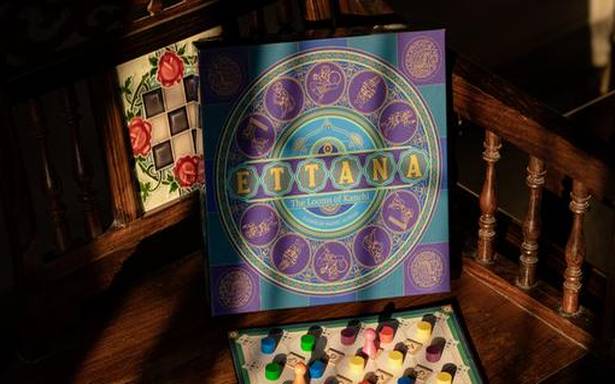 Don the garb of a weaver and create patterns in Ettana — The Looms of Kanchi, a boardgame inspired by Kanchipuram’s famed weaving traditions and fabrics

Dice are rolled, tokens are secured, moves are planned… All to find one’s way to a textile pattern and earn an anna (ancient Indian currency).

Once you clinch ettu anna (eight annas), you win. For today, you are a weaver hailing from Kanchipuram and your tasks include making patterns and decoding others, to put your creative abilities and colour sense to test. There are chances of other weavers disrupting your efforts, and being quick and efficient is key.

Time halts at the temple town of Kanchipuram, known for its silks that are eponymous with every occasion in South India, in this unusual strategy board game. Title Ettana — The Looms of Kanchi, the two-to-four player, peacock blue-hued, strategy game is a tribute to the looms and renowned craftsmanship of weavers there. The design of the game says as much, replete with traditional motifs — dancing girls on the cover, action cards sporting Bharatanatyam mudras and a colour scheme designed to appeal to Indian sensibilities.

The contents of the game  | Photo Credit: special arrangement

Ettana is in fact a direct portal to her Tamil roots, says Zurich-based Madhumita Mani, the creator of the game and founder of Mad4Fun Games. An avid board game enthusiast herself, Madhumita feels that Ettana… reflects a part of her own cultural identity. “The concept follows the idea of depicting the workings of a loom onto a board game. And, how the weavers come up with designs that are one-of-a-kind, which can’t be seen anywhere else,” says Madhumita.

Recognising and further shining light on the artform of weaving remain at the centre of the game, which has been in the making for the past one year.

“What would have been the weavers’ thought process a couple of 100 years ago? How would they have communicated and sold their work? How would the exchange have happened? I started thinking along those lines,” continues Madhumita. It took her a couple of months to zero in on a central concept. The gameplay focusses on replicating certain patterns on the board using the roll of dice and cards. The complexity of each design and their worth, vary. There are 36 different designs. The first player who manages to create patterns worth eight annas, wins the 35-40 minutes-long game.

Apart from the concept, the design is what makes Ettana intriguing. On the elaborately designed box are figurines of dancing girls engaged in different stages of weaving. They are accompanied by sculptural motifs that are specific to the temples of Kanchipuram.

“The recall value of the design is very high. If you are familiar with Kanchipuram and handloom, any component of the game will take you back instantly,” says the designer of the game Darshini Sundar. Her educational background in textiles aided this journey, adds the Bengaluru-based illustrator.

Her past work with THDC (Tamil Nadu Handicrafts Development Corporation) and DakshinaChitra including a curation of an exhibition showing the handloom process, helped this project. While the board itself is not made of fabric, it tries to replicate patterns that are often seen in Kanchipuram silks along with temple motifs that give it a distinct South Indian identity.

Is there a reason for choosing Kanchipuram silks? “We are both women, we are from Chennai, we love silk sarees and we have been brides!” says Darshini, laughing. Madhumita joins in, “Since I was a child, I have always had this fascination towards fabrics and sarees, particularly with incredible designs that are not so visible these days.”

Having said that, any other weaving style of fabric would still have made sense for the game, if not Kanchipuram silks, she adds. “Ultimately, it is a manifestation of how tradition meets the modern,” says Madhumita. It is a piece of India that you get to carry, concludes Darshini.

The game’s pilot samples are out and production will begin in April. For queries and pre-orders, write to [email protected]