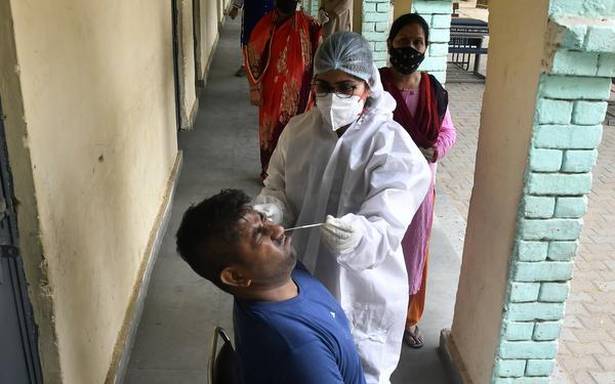 Over 98% of India’s population continues to be vulnerable/ susceptible to COVID-19, said Lav Agarwal, Joint Secretary, Health Ministry, on Tuesday, adding that so far only 1.8% of the total population of the country had been affected.

“Despite the high number of COVID cases reported so far, we have been able to contain the spread to under 2 % of the population. But with the majority still vulnerable, we cannot let our guard down and hence continued focus on containment is critical. The virus hasn’t got tired so we don’t have the option to relax just yet,’’ he said.

Releasing data, Mr. Agarwal said that from the 17.13% of the total COVID-19 caseload reported on May 3, India’s current status stands at a reduced 13.3%

NITI Aayog, Member (Health) V.K. Paul, who also addressed the conference, said that the COVID-19 curve was stabilising in India.

“We are already looking at the possible vaccine use for children as is being done internationally also, and are carefully tracking any changes in the virus. The basic rules to prevent the spread of the virus don’t change, and together we have to contain and defeat the virus,” he said.

Dr. Paul noted that Covaxin had received approval for Phase II/III clinical trials in the 2 to 18 years age group. “And I have been told that trials will begin in the next 10-12 days,” he said. He added that the COVID-19 National Task Force would examine the drug 2-deoxy-D-glucose (‘2-DG’) developed by the Defence Research and Development Organisation (DRDO) for adding it to the COVID-19 treatment protocol. The drug has received emergency use authorisation from the Drugs Controller General of India (DCGI).

Replying to a question about a COVID-19 virus variant found in Singapore, which could be more harmful to children, Dr. Paul said that it was being looked into.

“We are examining the report about this particular variant. Regarding COVID-19 among children, so far, the knowledge that we have is that most of them are asymptomatic, and it is reassuring that they don’t get serious infections. Meanwhile, we are keeping an eye on variants found in Singapore,’’ he said.