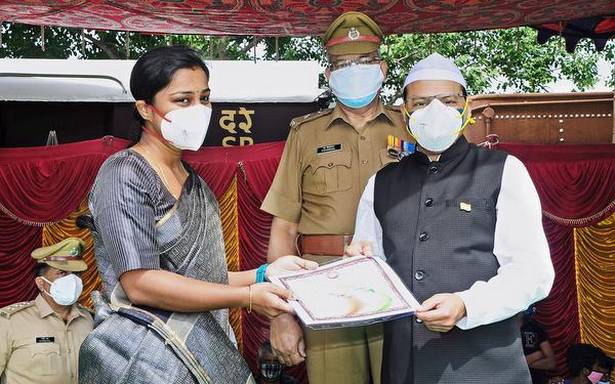 Ninety-six per cent of railway employees of the Salem Division have been vaccinated against COVID-1, Divisional Railway Manager A. Gautam Srinivas said during his Independence Day address here on Sunday.

In his address after hoisting the national flag, Mr. Srinivas said that the Coimbatore Railway junction was recently awarded with platinum rating by IGBC, the sixth station to achieve the ratings in the country. He said that parcel earnings increased by 14.7% compared to previous year and that Salem Division is operating three leased parcel cargo express trains, a unique achievement in Southern railway.

Mr. Srinivas said that the Division operated 91 Shramik special trains to transport migrant workers and the punctuality percentage of the Division is at 96.8%. The DRM mentioned that 32 RT-PCR camps were conducted for screening employees and their dependents.

On various development works, the DRM said that during the previous year, Foot Over Bridges were provided at Mettupalayam and Tiruppur railway stations and 14 Road Under Bridges were commissioned at various locations. He said that the height of platforms was increased at Attur, Chinna Salem, Virarakkiyam, Lalapet, Sithalavai and Pettavaithalai stations. “Platform shelters were provided at 25 stations at a total cost of ₹1.75 crore and differently-abled friendly toilets were completed at 29 stations at a cost of ₹1.40 crore,” he said.

Mr. Srinivas said that roof-top solar power plants of 20kW were installed at the Erode Railway Hospital. The DRM presented certificates to healthcare workers and RPF officers, staff during the event. He also flagged off four two-wheelers to be used at RPF outposts.