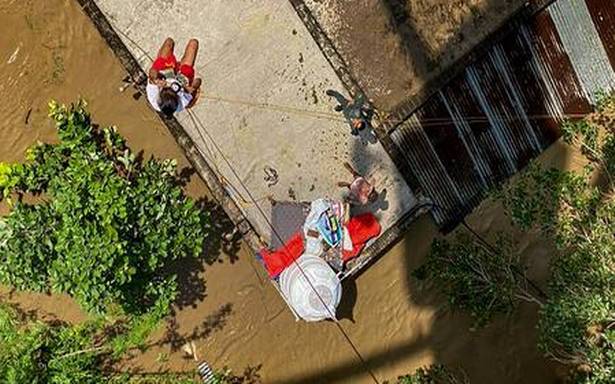 He made the statement while addressing ‘Anna Utsav’ programme in the morning.

Madhya Pradesh Chief Minister Shivraj Singh Chouhan on August 7 said that 8,832 people have been rescued from the flood-affected parts of the State, while 29,280 others have been shifted to safer places from these areas so far.

He made the statement while addressing ‘Anna Utsav’ programme in the morning.

State officials have earlier said that Gwalior and Chambal divisions in north Madhya Pradesh have been hit hard by rains over the last few days and at least 12 persons have died so far.

In a series of tweets earlier, the Chief Minister said that about 40 people were rescued from three flood-hit districts of the State on August 7 morning.

“I took stock of the flood situation and the ongoing rescue operation this morning in Guna, Ashoknagar, Vidisha districts. Rescue operation of IAF resumed this morning. The teams of SDRF and NDRF are also working since night to rescue the people trapped in villages,” Mr. Chouhan tweeted.

He said that during the rescue operations, carried out using helicopters, 15 persons each were rescued from Barri and Sirsora villages of flood-hit Ashok Nagar district on August 7 morning.

Six more persons were rescued from Vasunia Ghat village from the same district and shifted to a safer place.

Mr. Chouhan said that the people trapped in Sondha village in Guna district were safe and the NDRF team had reached the village.

A helicopter is also reaching Sondha village of Guna district from Gwalior for the rescue work, the Chief Minister said on Twitter.