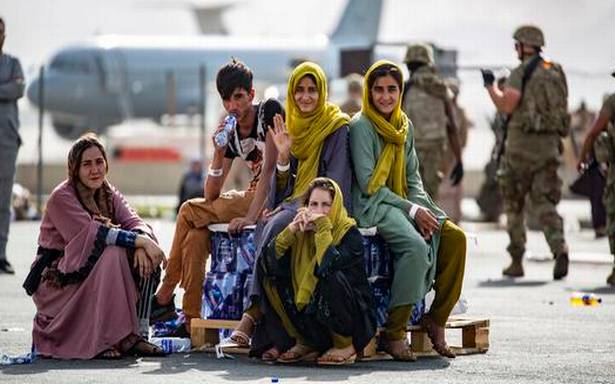 At least 80 Indian nationals were airlifted from Kabul to Dushanbe in neighbouring Tajikistan aboard a special Indian Air Force C-130 J aircraft, although more than 150 others failed to get past Taliban guards, who are blocking access to Kabul airport, in time for the flight on Saturday.

The airlift was part of the government’s ongoing efforts to bring back hundreds of Indian doctors, teachers, engineers and others who have been unable to leave the country since the Taliban took over more than a week ago.

The group of 80 Indians, who had managed to enter the airport perimeter on Thursday, finally boarded the special plane on Friday night, and are due to return to Delhi by Sunday morning. A third, smaller group of Indian nationals were able to board a NATO-operated charter, which has dropped them in Doha, and they are expected to return to India by commercial flights.

On Saturday, U.S.-led NATO forces guarding Kabul’s Hamid Karzai International Airport sealed several entry points due to the large crush of people clamouring to get in, and had to fire rounds in the air to stem the crowds. Visuals on international channels showed an unconfirmed number of bodies of Afghans who have died due to severe dehydration and getting crushed in the stampedes. Others reportedly died in the violence and firing by armed militia on crowds outside the airport.

Officials coordinating the movement of the second group of 150 said their convoy spent the entire day trying to enter the Kabul airport, and some of them were briefly detained by Taliban guards outside the airport to have their documents checked. Despite being released and allowed to proceed subsequently, the group had been unable to reach the airport gates, as of this report being written. A second IAF aircraft is now parked at Dushanbe airport, awaiting clearance to go back into Kabul once the group of 150 is able to enter.

“We are operating the flights from Dushanbe as it is difficult for planes to be parked in Kabul for an extended period,” explained an official involved in the operations.

The biggest problem is ensuring safe passage for the Indians trying to reach the airport, and increasingly, for them to be allowed in. The MEA’s special Afghanistan cell, that has been coordinating over the telephone and through social media groups with Indians stranded in Afghanistan, now estimates that once all the three groups return, an additional 200-250 Indians still remain to be rescued from Kabul. With the Indian Embassy in Kabul closed, organising their passage has become more difficult with each passing day, even as no formal government has been formed in Afghanistan.

“Our single focus at the moment is to bring Indian nationals back,” the official added, explaining that Afghan staff members of the Indian embassy, and other Afghans who holding visas would not be facilitated immediately.

Meanwhile about 72 Afghan Sikhs and Hindus, most of whom have Indian visas, and have families residing here were unable to fly out after Taliban militia reportedly turned them back from the airport, an NGO working on evacuating the Afghan minorities said. It is unclear whether the Taliban has officially decided not to let the group, that is taking shelter together at the main gurudwara in Kabul, leave.

“We are trying to ensure seamless coordination with local guards and through the MEA to US forces, so that they are allowed to enter the airport. Once they come to India, we will help rehabilitate them or facilitate onward travel,” Vikramjit Singh Sahney, President of the World Punjabi Organisation told The Hindu, explaining that the MEA has committed to bringing the group back by Indian Airforce aircraft if required.