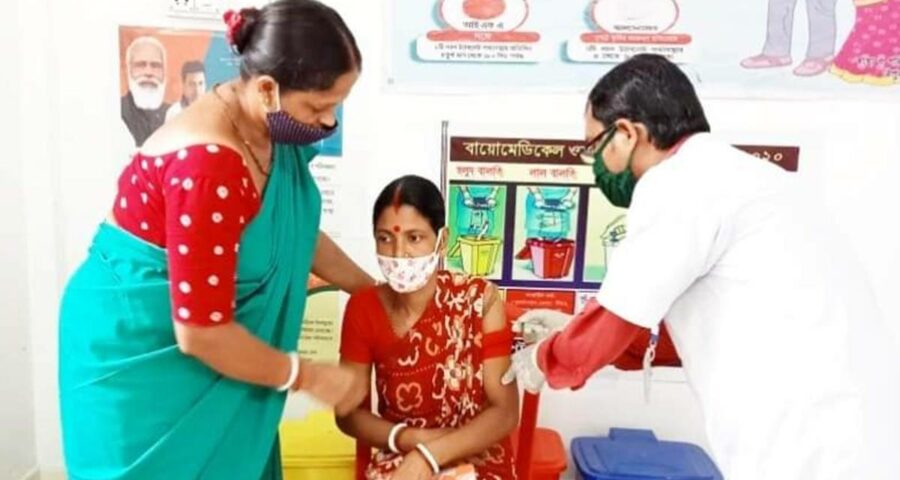 With 98 per cent of its 45-plus population and 80 per cent of the 18+ population getting at least one dose of the Covid-19 vaccine, Tripura has one of the highest vaccination figures in the country. Some weeks ago, Purna Laxmi Debbarma, an 85-year-old from Ramakrishna Para in West Tripura district, got her first shot of the Covid-19 vaccine. “I didn’t feel any pain,” she said, rubbing her left arm. “I will be healthy now with this vaccine. I’m happy.”

With 98 per cent of its 45-plus population and 80 per cent of the 18+ population getting at least one dose of the Covid-19 vaccine, Tripura has one of the highest vaccination figures in the country. But it wasn’t an easy journey for the tiny Northeast state — from battling initial vaccine hesitancy and tackling irregular supplies of the vaccine, to now being a vaccine trailblazer.

Tripura’s population of 37 lakh is spread across eight districts. Many of the tribal hamlets have rough terrain and are poorly connected. What made it doubly tough was the lack of awareness on Covid, let alone the vaccine, in some of the remote areas of the state.

Then began a concerted push to drive home the message, starting with televised appeals from Chief Minister Biplab Kumar Deb as early as March this year. Soon, personalised letters from district Chief Medical Officers were sent out in Hindi, Bengali, and indigenous dialects such as Kokborok. Awareness campaigns were done through public announcement systems and pamphlets were distributed in local languages and dialects. At the same time, thousands of vaccination camps were conducted across the state, with the state government employing an army of over 50,000 employees, including 20,000 healthcare workers, police and security personnel, to take the vaccines to far-flung villages such as Nabachandpara and Rambhaktapara in West Tripura or Gandacherra and Raishyabari in Dhalai district. Health workers held vaccination drives even in tribal hamlets with barely two-three families.

Talking about her door-to-door visits and vaccination camps in anganwadi centres, she says, “Initially, there was some resistance to the idea of getting vaccinated, especially among the elderly. All my patients are tribals and I don’t speak the language too well. But ASHA workers and local social organisations helped me and gradually, the picture changed. A few days ago, we vaccinated a 99-year-old woman and she was very happy,” Sharma said.

On Tuesday, announcing the success of the vaccination programme, Chief Minister Deb wrote, “I am very happy to announce that 100 per cent vaccinations have been completed in 73 gram panchayat areas in different districts of the state.”

The state government distributed 102 refrigerators and 20 deep freezers across the state. In order to boost vaccination figures, Tripura held special drives in two phases — May 25-27 and June 21-22 — during which over 5 lakh people were innoculated.

West Tripura District Information Officer Dr Ishita Guha said that over the last few weeks, they have been administering vaccines in big numbers, with several days recording up to 20,000 daily doses.

“During a special drive, we administered 50,000 doses in a single day in West district alone. While sceptics do remain, most people are now enthusiastic about the vaccine,” she said.

National Health Mission’s (NHM) state director Siddharth Jaiswal said that while the vaccination drive had support from everyone — from the CM down to the volunteers on the field — ASHA and Multi Purpose Workers (MPW), mostly belonging to local communities, were the biggest support systems.

“We had some difficulties in the beginning — there were rumuors and people were hesitant. But the ASHA workers spoke to the locals and drove home the point that vaccines are the only way to stay safe,” he said.

A total of 64,860 people have been found to be infected in Tripura so far (since the beginning of the pandemic last year), with 3,560 active cases. The state has recorded 669 Covid 19-related deaths.