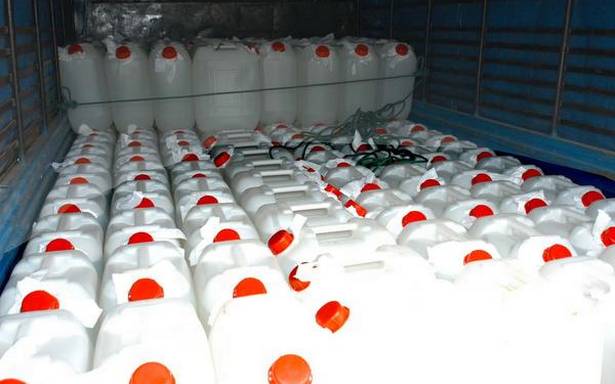 At least eight persons have died in last 48 hours in two different districts of Bihar, allegedly after consuming illicit spurious liquor. The State banned liquor in April 2016 under the new Bihar Prohibition and Excise Act, 2016.

Six persons died in a suspected case of consuming spurious liquor in Kharidi-Bigha village under Bhadauni panchayat of Nawada district, while two persons lost their lives in the Godhiyari village of Bakhri block in Begusarai district.

As many as seven other persons from Kharidi Bigha and Gondapur area of Nawada district are said to be seriously ill and are admitted to hospitals, allegedly after consuming illicit liquor, while one person, Birju Sahni (25) from Bakhri in Begusarai, too has taken seriously unwell after consuming spurious liquor along with two of his friends.

The victims in Nawada district have been identified as Ajay Yadav, Ramdeo Yadav, Shailendra Yadav, Shakti Singh, Loha Singh and Prabhakar Kumar Gupta. Another person, Chamari Choudhuri from the Kharidi Bigha village of the district, has also lost his vision after consuming spurious liquor.

Shakti Singh’s family members admitted to local media persons that he (Shakti Singh), along with others, died after consuming spurious liquor on the festival of Holi on March 29.

All the dead have been cremated by their family members. However, the district administration has not confirmed yet that six people died after consuming illicit liquor.

“It’s all a case of suspected death. Investigation is on and we can say anything about it only after that,” a local district official said. Local officials and police are camping in the village to get details.

Earlier, as many as 19 persons had died in Khajurbanni area of Gopalganj district after consuming spurious liquor in 2016, and recently, nine accused persons were awarded a death sentence and four others to life imprisonment in the case. Several policemen too were dismissed in the case but their services were recently reinstated by the Patna High Court.

Ever since liquor was banned in Bihar, as many as 2,55,111 cases related to the violation of the new prohibition laws have been lodged and 3,39,401 people have been arrested in the State till February 2021. A record 51.7 lakh litres of country-made liquor and 94.9 lakh litres of Indian Made Foreign Liquor (IMFL) have been seized by police and excise officials in the State.