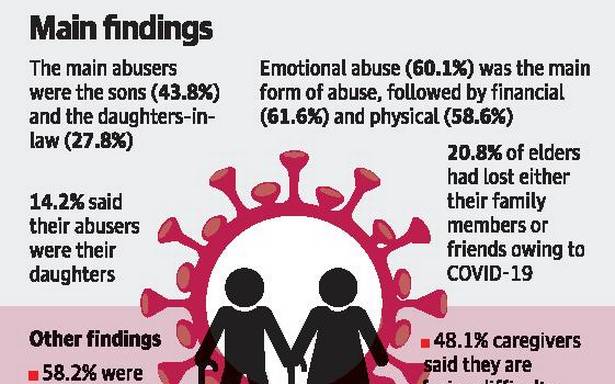 HelpAge India survey points to a ‘deep sense of isolation’

As many as 62.1% of senior citizens feel that the pandemic has increased the risk of elderly abuse, according to the findings of a survey by HelpAge India.

The report, The Silent Tormentor: COVID-19 and the Elderly, was released on Monday, and was based on a survey conducted across six cities: Delhi, Mumbai, Bengaluru, Hyderabad, Kolkata, and Chennai. With a sample size of 3,526 senior citizens, the report pointed out that there was a deep sense of isolation and fear among them during the pandemic.

Imtiaz Ahmed, Mission Head – Agecare, HelpAge India, in a press release said, “We received over 1,000 calls to our Elder Helpline relating to elder abuse, violence and disputes, in the second wave, up by 18% from the first. The helpline received almost 20,000 calls in total in the second wave, a 36% increase since the first, with calls about counselling increasing by 111 % and requests for income support by 54%. COVID-19 has become the primary abuser, affecting elders in the worst ways possible.”

The report also pointed out that 20.8% of elders had lost either their family members or friends due to COVID-19.

Many of them were worried about being hospitalised if they contracted the infection, while some said they had a fear of dying.

The pandemic also pointed out that there was a distinct gap in the younger members of the family in understanding the needs of the elders, as 61.4% of elders said that ‘work from home/study’ affected their daily routine negatively, while 71.6% of the caregivers said it did not affect the elders’ routine.

Elders dependent on their kin financially stated that the pandemic had impacted their income stream as many of the breadwinners had lost jobs or faced a pay cut.

Meanwhile, in the formal old-age home settings, 50% of them said that they faced scarcity of funds. The survey also noted that 37 % of the homes did not have isolation rooms if any were affected.

Many of the elderly also said that they had felt a loss of communication with a loved one and they find themselves waiting for a call more than ever before.

This was also because visitors were not allowed to meet their parents and grandparents. Many of the old age homes not only had a tough time accessing the basic resources, but also reported a shortage of staff.