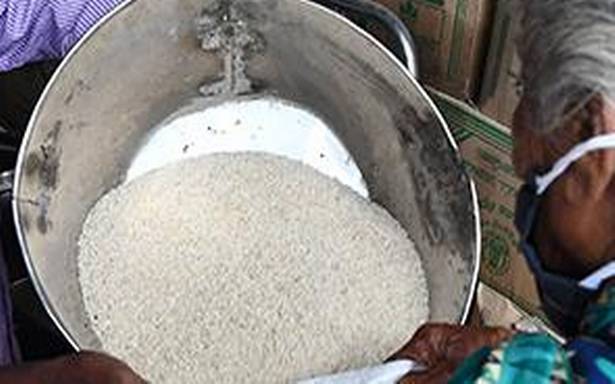 It will now be sold as animal feed

About 510 tonnes of fortified rice, meant for distribution to consumers through the public distribution system (PDS), has expired, and the Tamil Nadu Civil Supplies Corporation (TNCSC) has decided to sell the stock as animal feed. Since the stock did not meet quality standards during lab tests, it has been decided that it will be sold, a senior official said.

The stock was part of the Abdul Latif Jameel Poverty Action Lab’s (J-PAL) “Alleviating anaemia” project, launched in collaboration with the Tamil Nadu Government. It aimed at addressing anaemia through food fortification, at scale, by distributing fortified rice with vitamins and micronutrients to consumers. Major international funders too supported it.

“Due to unavoidable circumstances, the 510 tonnes of fortified rice got expired before being issued to PDS shops. Therefore, it has been decided that the 510 tonnes of expired fortified rice will be sold through e-tenders, for use as animal feed (not for human consumption),” a document relating to the tender issued for the sale of the stock stated.

At present, the stock is in a godown in Manalur, Chidambaram taluk, Cuddalore district. “The expired fortified rice should strictly be used as animal feed. The expired fortified rice should not be used for human consumption under any circumstance,” the document said. The rice was meant for distribution to PDS beneficiaries from Bhuvanagiri and Chidambaram taluks in Cuddalore district.

A government order about the project, issued by the Planning, Development and Special Initiatives Department of the State Government in November 2015, said it aimed to address anaemia in the State, where such deficiencies remained prevalent among the poor, by providing multi-fortified rice (ultra rice) through the universal PDS.

When contacted, TNCSC managing director S. Prabhakar told The Hindu: “Since it did not meet quality standards during lab tests, with the permission of the government, it has been decided that the rice will be sold.” He said the rice did not meet the quality standards during lab tests twice — once in a lab in Tamil Nadu and another in Mysuru, Karnataka.

Fortification is the practice of increasing the content of essential micronutrient — vitamins and minerals — in food.

“Rice can be fortified by adding a micronutrient powder to it that adheres to the grains or by spraying the surface of ordinary rice grains, in several layers, with a vitamin and mineral mix…,” according to WHO.