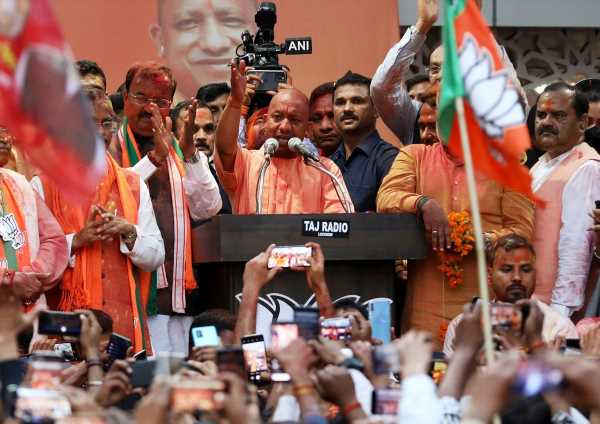 Yogi Adityanath’s aura is no longer limited to Uttar Pradesh.
At the age of 49, his journey to the higher echelons in the BJP has well and truly begun, predicts Sudhir Bisht.

The 5-state assembly election results are out and the Bharatiya Janata Party and Aam Aadmi Party have come out with flying colours.

The BJP has swept Uttar Pradesh and won 273 seats along with its allies, the Apna Dal-S and the Nishad Party.

In Punjab, the Aam Aadmi Party has decimated all the political parties by victories in 92 seats in a 117-member legislative assembly.

In Goa, the BJP reached the half-way mark and at least one Independent winner has confirmed his support, paving the way for yet another BJP government in Goa.

Bucking the past trend of alternating between the BJP and Congress, the people of Uttarakhand have voted the BJP back to power, even though Pushkar Singh Dhami, the incumbent chief minister, has been defeated from the Khatima constituency. Many critics called Dhami an accidental chief minister, but in my assessment, he is one of the most intelligent, level-headed and incorruptible leader in Uttarakhand politics.

Manipur also voted the BJP back to power with a simple majority. It may be noted that the incumbent CM, Nongthombam Biren Singh, is a former Congress leader who has led the BJP to a second term.

What about the Grand Old Party, the Indian National Congress? It won just 18 seats in Punjab where it was expected to win. In Goa, it won 11 seats in an assembly of 40. In Uttarakhand, where the BJP appeared to be in dire straits, the Congress won just 19 seats out of 70. In Uttar Pradesh, the Congress won two seats and in Manipur it won five seats in a 60-seat assembly.

I consider the BJP retaining power in the four state assemblies as a remarkable achievement. However, the magnitude of AAP’s win in Punjab is something that outshines even the BJP’s superb accomplishment.

I listened to the victory speeches made by Prime Minister Narendra Modi, Uttar Pradesh Chief Minister Yogi Adityanath, Punjab CM-designate Bhagwant Mann and AAP supremo Arvind Kejriwal, and share the significant points made by these leaders and what is the political import of these messages.

Yogi Adityanath’s speech: Transition from a UP CM to a leader with national perspective. New-found humility and grace

It is perhaps for the first time that a BJP state level leader has celebrated victory with so much dazzle. Normally the BJP’s victories, even those in state elections, are celebrated on a mega scale at the BJP’s national office in Delhi. The state leaders avoid hogging the limelight. But UP’s BJP team celebrated its victory in a grand fashion, much before the celebrations took place at the BJP headquarters.

What was remarkable is that Yogi started by telling the cheering supporters that the BJP had won the elections in four states. He didn’t start off by talking about the UP elections. His opening remark to the rapturous crowd was about the BJP’s big onward march at the national level.

When did you last hear a state leader bringing in the national perspective so conspicuously?

Yogi Adityanath’s aura is no longer limited to Uttar Pradesh. At the age of 49, his journey to the higher echelons in the party hierarchy has well and truly begun.

What is also noteworthy is that he gave the entire credit for his victory to Modi. He mentioned ‘Modi’s blessings’ at least six times in his speech and called Modi the greatest leader in the world and how fortunate the BJP was to have a leader like him.

Yogi in his measured speech signalled his complete submission to Modi. His reverential mention of the other three BJP leaders was to tell the people that Yogi is not what the English media portrays him to be — a bull-headed, arrogant leader.

It rather suggests more devotion and more submission to Lord Ram. Yogi today has become a true ‘Hindu Hriday Samrat’ (one who rules the hearts of Hindus). Modi’s body language, as he walked towards the victory stage, suggested that he was visibly tired by the nonstop campaigning he had undertaken. However, once he reached the rostrum, he appeared fully energised. The very idea of making a speech excites him!

He mocked the political pundits without calling them so. He referred to them as ‘gyanis’ or wise men.

I believe that in spite of the extempore nature of all of Modi’s speeches, he never speaks irrelevant stuff.

In UP there were media reports of Brahmins (or ‘Panditji‘ as they are often called) were upset with Yogi Adityanath’s government. Modi quickly substituted ‘pundit’ with ‘gyani‘ in his victory speech. I am a very passionate observer of Modi’s speeches and this quick substitution wasn’t lost on me.

Modi also had a word of comfort for the BJP cadres in Punjab. It is well known that the BJP had always played second fiddle to the Akali Dal in Punjab politics. The Akalis split with the BJP on the issue of the farm bills months ago and it left the BJP with little hope of making it count in Punjab.

Modi, in his victory speech, signalled his resolve to build the BJP in Punjab. This is a challenge that he has taken on and if his track record is any indication, he will do everything to carve out a space for the BJP in Punjab.

The third noteworthy thing Modi said in his victory speech is that he made his intentions clear on going after corrupt (Opposition?) leaders. In his characteristic manner, he asked the crowd if he should take strict action against the corrupt or not. ‘Yes!!!’ roared back the faithful crowd.

I foresee much trouble for many leaders in power in some of the richest Indian states. Arvind Kejriwal’s victory speech was one of grace and gratitude. He appeared almost in a meditative mood. Not like the fiery, combative AK that we often see on television. Just as the branches of a tree that is laden with fruits appear to be bent, Kejriwal was bent down in humility. He made bad copy for me.

Did he appear overwhelmed by the magnitude of AAP victory? Absolutely not.

Kejriwal had given in writing, yes in writing, during an India Today TV programme that Bhagwant Mann would win by a margin of over 50,000 votes and that Charanjit Singh Channi, the outgoing Congress CM, would lose from both seats. So, he was not overwhelmed or pleasantly shocked at AAP’s victory. But he remained humble and self-effacing on his day of victory.

Kejriwal is a master strategist and is accomplished at strategy execution on the ground. He has set his eyes on the national scene. He sees himself as a challenger to Modi, but he didn’t say so on his own. That is left to his aide Raghav Chadha, who said the AAP was a ‘national and a natural successor’ to the Congress party. 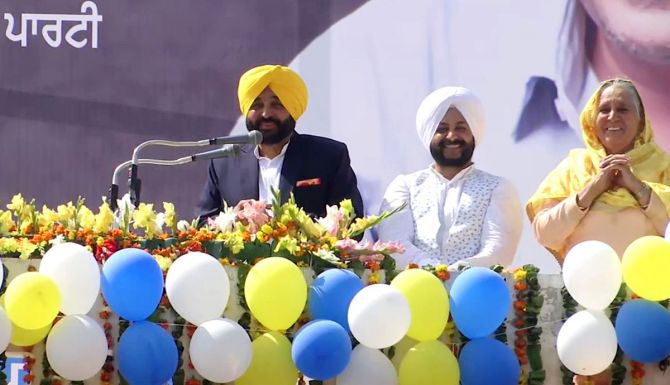 The former comedian has donned the mantle of hero now. Derided by the media for his love for Bacchus, he appeared emotional at his victory speech.

With a doting mother by his side, he was the proverbial son of the soil.

Bhagwant Mann declared that no government office would put up the CM’s picture on the wall. Instead, he wants Shaheed Bhagat Singh and Babasaheb Ambedkar’s pictures on the walls of all government offices. This changes the optics for AAP. No Mahatma Gandhi pictures in AAP land. I thought Gandhi was the one who inspired Kejriwal. There could have been no victory speech from the Congress as the party came a cropper, yet again.

The grand old party was represented by the family faithful, Randeep Singh Surjewala, who blamed Captain Amarinder Singh for the loss in Punjab and praised, indirectly, Priyanka Gandhi for her efforts in reviving the organisation in Uttar Pradesh.

The joke in media circles in Delhi is that five years ago, it would have been impossible to think that the Congress would double its seat tally as compared to the Bahujan Samaj party. This has happened under Priyanka Gandhi. The Congress won two seats against the BSP’s one!

Surjewala congratulated AAP on its victory in Punjab, but didn’t congratulate the BJP on its 4-0 victory.

Even Modi didn’t make any mention of the Congress in his victory speech.

Surjewala omitted the BJP owing to his party’s extreme dislike for Modi’s party. The feelings are identical on the BJP’s side. But Modi didn’t mention Congress, some say, out of sheer pity.