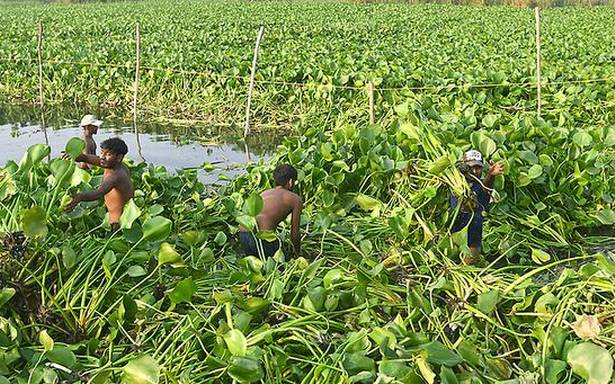 The Delhi government on Thursday began a 21-day cleaning drive for a four-km-long stretch of the Yamuna near Sarai Kale Khan under the Centre’s “Clean India” programme.

The government is using excavators and an amphibious machine to pull waste and hyacinths to the banks of the river.

Rajendra Singh, who is dubbed “waterman of India”, is also part of the drive. “In the last 20 years, so much money has been spent to clean the river but Yamuna ma is still sick. People and authorities should come together to clean it,” Mr. Singh said.

On Thursday evening, about half a dozen workers were found cleaning the river, some waist-deep and other knee-deep in the blackish water, without any boots, gloves, or masks.

Currently, the Yamuna is polluted and not even fit for bathing in the Delhi stretch, except for Palla, the point where the river enters the city, according to government data.

District Magistrate (South-East) Vishwendra said the hyacinths in the river would be used to generate electricity.

“Once we pull the hyacinths to the banks, we will let those dry. After that, we will supply them to a waste-to-energy plant to generate electricity. We are also involving citizens, volunteers from Nehru Yuva Kendras and NGOs in the process so that they will connect with the river and understand its current state. Once they come here and see it, they will own up the river,” Mr. Vishwendra said.

Districts have been doing different programmes under the “Clean India” initiative since October 1, with an objective to involve citizens in waste collection and its disposal.

The East district has conducted several plog runs and 2,275 kg waste has been collected, said the DM. In the North district, two waterbodies are being cleaned, a park is being beautified, and awareness programmes are being held.