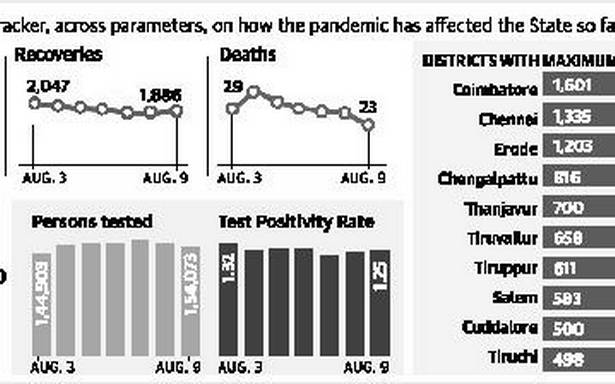 Till date, 25,77,237 persons have tested positive for the infection, according to the daily bulletin of the Directorate of Public Health.

Though fresh infections in the other districts were restricted to double digits, Thanjavur (95), Tiruvallur (88), Cuddalore (87) and Salem (85) recorded higher number of cases. Theni (8), Thenkasi (5), Ramanathapuram (4) and Perambalur (8) recorded the lowest number of fresh infections.

In Chennai, 5,39,856 persons have tested positive till date. While 5,29,522 persons had been discharged, 1,994 are currently under treatment either in healthcare facilities or at home. The district has recorded 8,340 deaths so far.

As many as 1,886 persons were discharged in a day. Thus far, 25,22,470 persons had been treated and discharged, the bulletin stated.

Of the 23 deaths recorded in the last several hours, two persons who had been admitted to private hospitals succumbed to the infection, and 21 others died in government medical facilities. While four persons had no co-morbidities, 19 had pre-existing health conditions.

The bulletin included eight deaths that occurred in May. The reconciled reports were of persons who had been admitted to hospitals in Salem and Tiruppur districts.

Among them was a 61-year-old man from Salem, who tested positive for COVID-19 on May 16, and was admitted to the government hospital in Attur with complaints of fever, cough and breathing difficulty for three days. He died on May 18 and the hospital recorded the death as having occurred due to COVID-19 pneumonia.