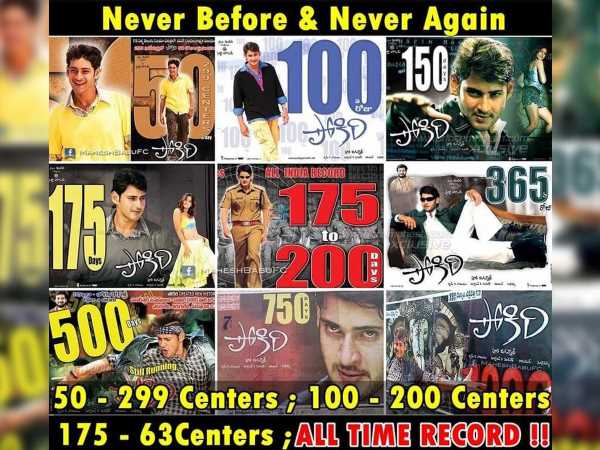 Telugu superstar Mahesh Babu starrer Pokiri completed 15 years. The film Pokiri,  which was released on 28th April 2006, will always be counted among the best movies to be made in Tollywood. The dialogues, beautiful songs and the performance of its cast were the major highlights of Pokiri. The film Pokiri was not only a big hit at the box office, but everyone showered praises upon Mahesh Babu for his terrific acting.

In Pokiri, Mahesh Babu romanced Ileana D Cruz. Apart from them, the film also had Prakash Raj, Nassar, Ashish Vidyarthi, Sayaji Shinde, Ajay, Brahmanandam, Ali, Venu Madhav, Master Bharath and Subbaraju in the crucial roles.  Mahesh Babu essayed the role of an undercover cop Krishna Manohar IPS, who was on a mission to ruin the mafia gangs from the society. He hided his identity as a cop and acted as a gangster to kill the goons.

The action and romantic drama Pokiri was directed by Puri Jagannadh and jointly backed by Jagannadh and Manjula Ghattamaneni under their banners Vaishno Academy and Indira Productions.

The film Pokiri’ success catapulted Ileana D Cruz into stardom and brought the  recognition to Puri Jagannadh as a writer and director. Later it was remade in Tamil as Pokkiri, in Hindi as Wanted, in Kannada as Porki and in Bengali as Moner Jala.