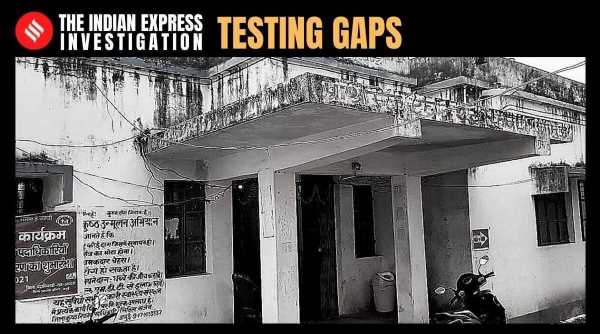 Data entry staff at the district headquarters blame PHC staff at the ground level, claiming that they “have to enter 10 zeroes to upload and validate the data in the system in cases where PHCs do not fill in mobile numbers”. 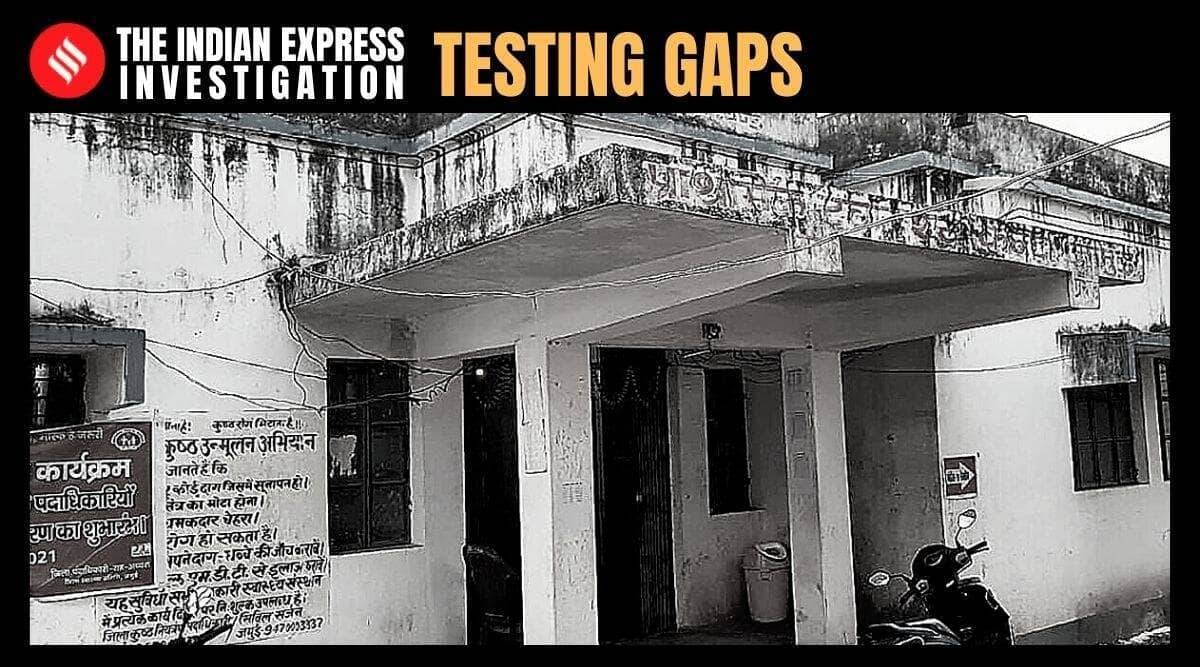 TEN ZEROES in a sequence don’t add up to anything. In databases, they are used to denote missing entries. But in lists of those tested for Covid in districts of Bihar, they keep popping up against names.

* The same set of zeroes has been used for 73 of 150 entries on January 16 at Jamui Sadar, another PHC in the district.

An investigation by The Indian Express of 885 entries for Covid tests in January from six PHCs in Jamui, Sheikhpura and Patna has found that this is just one of the several ways in which mobile numbers — a key tool to track and verify those tested — were allegedly misrepresented in a scramble to meet testing targets. And, in some cases, upload fake data to siphon off profits from unused testing kits.

Data entry staff at the district headquarters blame PHC staff at the ground level, claiming that they “have to enter 10 zeroes to upload and validate the data in the system in cases where PHCs do not fill in mobile numbers”.

But district officials acknowledge that the sheer scale of such entries, especially in PHCs located in towns such as Jamui Sadar, needs to be probed. In fact, the argument that this stands for people without phones is tested by the fact that in two cases at Jamui, the mobile number, according to records investigated by The Indian Express, was 0200000000. 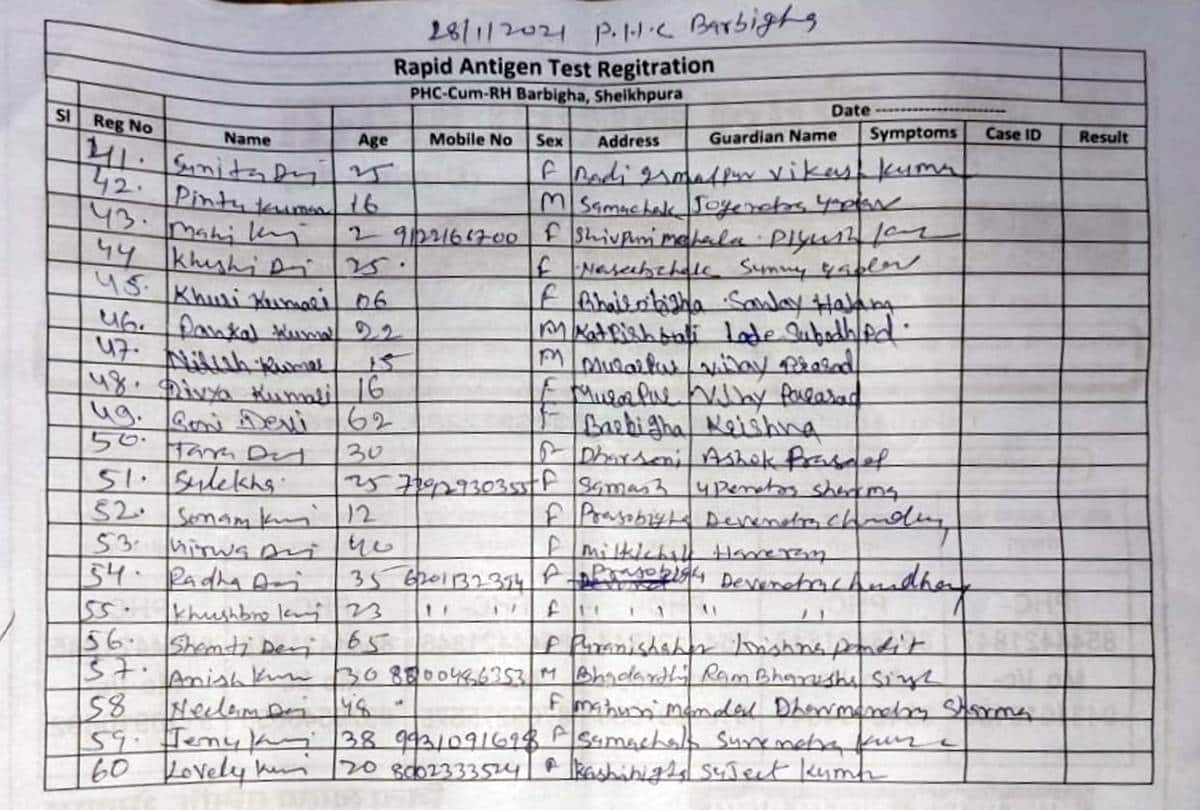 “Now that fake data has come to our notice, we will examine this at the PHC level,” said a senior district official in Jamui. “These PHCs are in or near towns, such as Jamui Sadar…it is difficult to believe that those tested did not have cellphones,” said another official. “Even if the particular person does not have a cellphone, the usual protocol is to get a number of a relative or someone close just in case we need to follow up if the test is positive.”

Then there are people on the lists whose names and phone numbers are genuine but have not been tested.

“How can they use my number? Who is doing this fraud?” asked Manoj Kumar, a student in Sikandara. The names and contact details of Kumar and his brother have been listed among those tested at Jamui’s Sikandara PHC on January 18. “I am going to the PHC to complain to the medical officer in-charge,” he said.

If Manoj Kumar is angry, Suresh Paswan is bewildered. Testing records on January 25 at the Sikandara PHC lists Paswan and his phone number. But when contacted at the number, Paswan said that neither he nor any member of his family had undergone a Covid test anywhere.

“Early last month, a Health Department team had come for some survey in our locality and took down our names and phone numbers. We were told that we would have to undergo a Covid test. Nothing happened after that,” said Paswan, a daily wage labourer.

In the same category are Ritesh Kumar, a student, and Kanhaiya Kumar, a five-year-old boy. Ritesh echoed Paswan: “A survey team had visited our locality and collected our names and numbers. But none of us were tested.”

Records list several such cases, as if on loop:

* The cell number of Rudal Yadav, a driver from Bhagalpur’s Jagdishpur, about 110 km away from the Sikandara PHC, was listed against five entries on January 16. “I get SMSes from time to time but I ignore them. Where can I complain? And who has the time?” he said.

* Jitendra Yadav, a graduate, is stunned to learn that his phone number has been used against seven entries in the Sikandara PHC list of January 16.

* Kishori Yadav, a marginal farmer from Ramdih village of Sikandara, says he “cannot understand” how his phone number is listed against seven entries with names of his family numbers on the Covid testing list.

* Raju Kumar, a student from Sheikhpura, is listed among those tested on January 25 at the Barbigha PHC. Kumar acknowledges that he got tested, but on January 21.

* T Mahto, who works at the Sashastra Seema Bal (SSB) office in Patna, is “surprised” to learn that he is listed as tested for Covid at the Rukunpura PHC nearby on January 21. “I didn’t undergo a Covid test that day. But my mobile number is with the health centre because we have to take Covid tests every time we rejoin duty after leave,” Mahto said. In Rukunpura, however, 49 of the 52 entries for January 21, 22, 23 and 25 were confirmed as genuine.

There is no official explanation yet for the faulty data.

“In the initial phase, several patients were reluctant to give their numbers… But we will look into the cases in Barbigha and Ariari,” said a district official in Sheikhpura.

In Patna, an official said: “We have noticed the least number of anomalies here. But we are still monitoring our data closely.”

But again, voices from the ground suggest that there is more to these numbers. “It is the job of lab technicians to go to the field and hold testing camps every day in villages on rotation. Many do not do so. The fudging of data has been happening since September last year when cases started dipping and people stopped coming for tests,” said a staff member at a PHC in Sheikhpura.

A Jamui PHC staffer said: “Every PHC has a vast pool of data from previous tests and various Health Department surveys during the peak of the Covid crisis. That’s why you find genuine names and mobile numbers… it does not mean that all of them have been tested.”

On Monday, investigating 588 entries in Jamui, The Indian Express reported on the string of glaring irregularities that violated basic data protocols and cast doubts on the credibility of testing data from these districts. Presented with the findings, Pratayaya Amrit, Principal Secretary, Bihar Health Department, had promised an investigation “all levels” — and said that civil surgeons, who are in charge of all Health Department activities in a district, are being asked “to explain how such things are happening”.