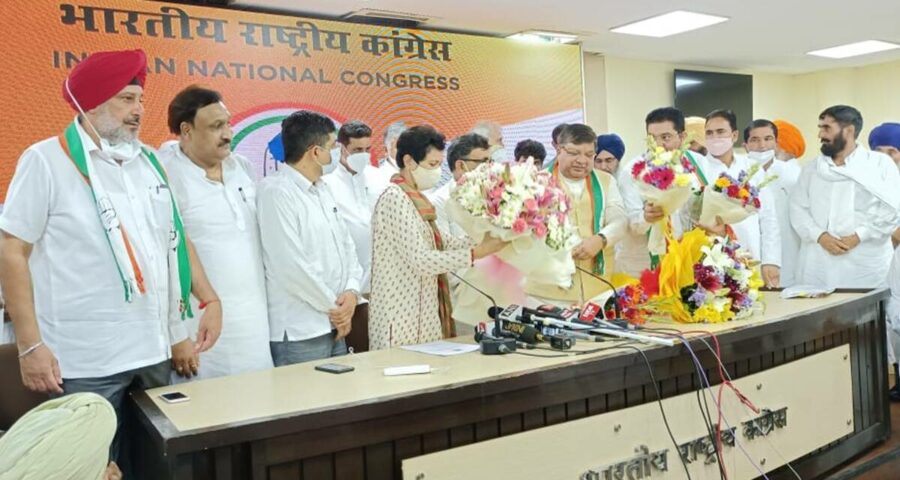 The three are BJP's rebel Pawan Beniwal, industrialist Ashok Goyal (who had sought BJP's ticket from Hisar Lok Sabha but could not get it) and former MP Tara Singh’s son Kanwaljit Singh. In a significant development, three former leaders of BJP and INLD from Haryana joined the Indian National Congress in the presence of HPCC chief Kumari Selja and party affairs in-charge Vivek Bansal in New Delhi on Monday.

The three who joined the Congress in a ceremony organised at AICC headquarters in New Delhi include BJP’s rebel Pawan Beniwal, industrialist Ashok Goyal (who had sought BJP’s ticket from Hisar Lok Sabha but could not get it) and former Member of Parliament Tara Singh’s son Kanwaljit Singh aka Prince.

Ahead of the 2014 assembly polls, Beniwal had quit INLD and joined BJP. He contested Ellanabad constituency in 2014 and 2019 on a BJP ticket against INLD’s Abhay Chautala. He lost both times. Since Abhay vacated his seat in support of the ongoing farmers’ agitation, the Ellanabad seat is due for a bypoll in the coming few months.

Although he lost, BJP had appointed Beniwal as Chairman of Haryana Seed Development Corporation from 2016 till 2019. However, Beniwal also quit BJP in April this year as a mark of solidarity towards the farmers’ protest. Beniwal is likely to be chosen as Congress nominee for the Ellanabad by poll.

Karanjit Singh is the son of former Member of Parliament Tara Singh, who was elected to 10th Lok Sabha from Kurukshetra. Karanjit, too, had been associated with INLD for long before quitting the party.

“It is a significant achievement for Haryana Congress. I welcome all these leaders and assure them that they shall be given due respect and positions in the party”, Vivek Bansal said.

Selja said, “The BJP-JJP leadership is confined to their homes and offices. They cannot dare go among the people who had elected them. People of Haryana want to get rid of this dispensation as early as possible. Whenever the next polls are held in Haryana, Congress party shall surely register a historic victory.”