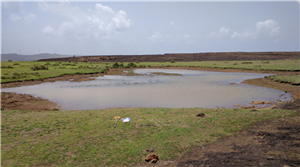 The Indian summer monsoon season between June and September brings very high rainfall (over 1000mm) along these sites. The rainwater creates the perfect ecosystem for these Heteroptera species, or simply the aquatic bug species. At least ten flightless insect species have been discovered in temporary ecosystems like rock pools found along the Western Ghats which survive up to two consecutive monsoon seasons.

The observations were made by a group of Pune-based researchers — Shruti Paripatyadar, Sameer Padhye and Anand Padhye, who studied 36 small water bodies formed in the laterite rock outcrops, known as rock pools. The insect samples were primarily collected from Kusawade, Mhavashi and Panchgani sites in southwestern Maharashtra during 2015 and 2016. These habitats exist temporarily and are formed by the accumulation of water following rainfall in the locality.

The Indian summer monsoon season between June and September brings very high rainfall (over 1000mm) along these sites. The rainwater creates the perfect ecosystem for these Heteroptera species, or simply the aquatic bug species.

“Of the 25 aquatic species studied at the three locations, ten were flightless. Despite having wings, these insects lacked the ability to fly. They instead bred and thrived on the food available in the water accumulated inside the rock pools formed during the rainy season,” said Shruti Paripatyadar, lead author of a recent study published in the journal International Review of Hydrobiology.

As these species of insects are active disperses, it is believed that they hop ecosystems in search for suitable living conditions but choose temporary habitats like rock pools for breeding purposes. However, the discovery of flight-less specimens within this ecosystem has come as a new revelation to the scientists.

While monsoon may be the key driver of life for these bugs, the quality and its effect on their survival is yet to be fully understood, shared Padhye, the study’s co-author. The species abundance inside these pools was noted to peak during the mid-monsoon season as compared to the onset and withdrawal phases of the monsoon.

He said, ” Water remains accumulated in the rock pools for a maximum period of six months. Our analysis using water pH, salinity, depth and size of the rock pool values have not shown any direct link to the breeding or survival of these insects.” said Padhye who works with Biologia Life Science LLP, Ahmednagar.

The trio noted that due to their innate ability to fly and disperse locally, the flying species of different pools shared more species than their flightless counterparts.

“As they sense the depletion of water in the pools, those able to fly migrate to pools that still hold water,” added Paripatyadar.