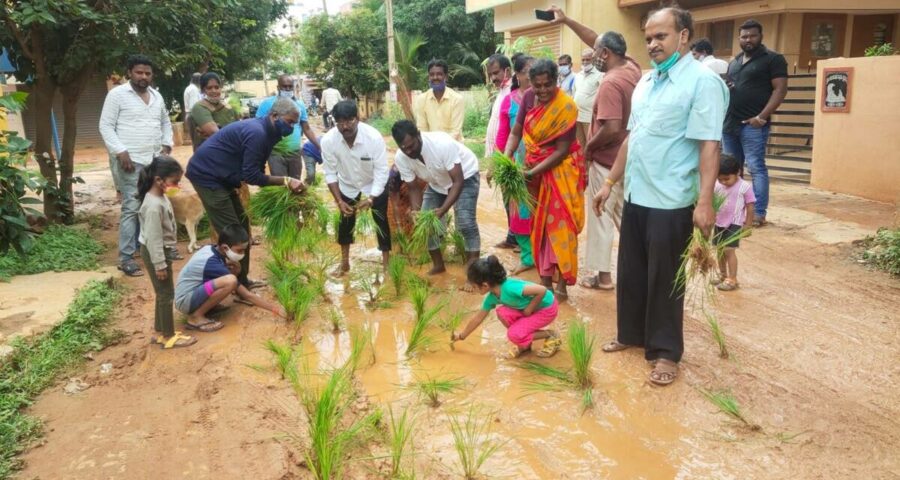 The Medarahalli main road has been in a dilapidated condition after various civic agencies dug it up one after the other without any coordination. Tired of trying to draw the attention of the Bruhat Bengaluru Mahanagara Palike (BBMP) to the poor condition of roads in their locality, residents of Medharahalli in north Bengaluru’s Shettihalli ward have staged a protest by planting paddy in the slush that was once a main road in the area.

The Medarahalli main road has been in a dilapidated condition after various civic agencies dug it up one after the other without any coordination. “In 2018, the Bangalore Water Supply and Sewerage Board (BWSSB) dug up the road to lay Cauvery water supply lines and drainage lines but the BBMP failed to carry out asphalting work afterwards. We planted paddy because there was no way left to draw their attention,” said former panchayat member K Somashekar.

The lack of coordination between the agencies has left residents in many parts of Bengaluru fuming, especially after the recent heavy rains in the city. Besides Medharahalli, poor roads have also been a concern in east Bengaluru localities like Varthur and the Old Airport Road area.

“The airport compound wall road in Konena Agrahara ward was dug up by the BWSSB for laying the water supply pipeline under the Unaccounted For Water (UFW) project. The pipeline was laid, but they haven’t restored the road. The agencies keep blaming each other due to lack of coordination and transparency,” said Poornima Shetty, president of the Rustambagh Association for Welfare. Even venturing out is dangerous as there have been incidents of senior citizens falling down on the pothole-riddled roads in the area, she said.

Parts of the city which had been added to the BBMP limits in the last decade are the worst-hit. Varthur residents have been struggling to get water supply in their homes as pipes have been damaged and roads have turned slushy due to the ongoing civic work.

“This area came under the municipal limits in 2007. It has been 13 years and basic infrastructural woes still continue. The BWSSB dug up most of these roads to lay underground drainage lines and water lines. Some patchworks have been done in areas where residents protested, but most areas are facing issues,” said Jagadish Reddy, a member of Varthur Rising, a citizen group.

“BBMP engineers promise to relay the roads that are dug up, but they disappear after the work is done,” Reddy said.

Earlier, the BBMP had plans to implement a Happiness Index in the city as per which citizens would rate the quality and efficiency of civic work carried out by contractors and based on this the civic agency would clear the contractors’ bills. Residents now feel that the extensive damages caused by civic agencies on the roads would turn the Happiness Index into nothing short of an unhappiness index.