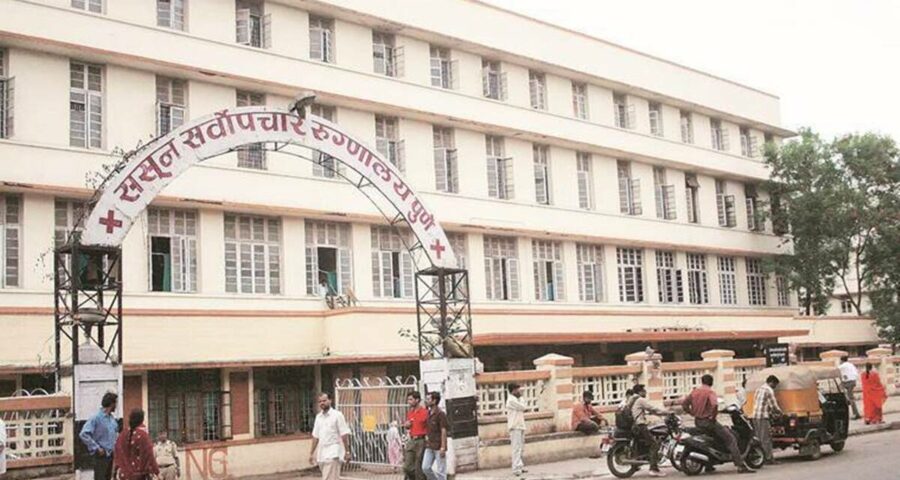 Authorities at Maharashtra's largest government hospital went into an emergency mode as they feared the buffer stock of oxygen would not last till the time the next supply rolls in. Around 20-25 Covid-19 patients were shifted out from Sassoon general hospital’s multispecialty building to another one on the premises late Friday evening. Authorities at Maharashtra’s largest government hospital went into an emergency mode as they feared the buffer stock of oxygen would not last till the time the next supply rolls in.

Oxygen consumption at the Sassoon hospital has gone up to 30-32 kilo litre per day. “We are keeping no stone unturned to ensure regular supply of oxygen and now the tanker comes twice a day so that we have sufficient buffer stock. However, on Friday evening, a smaller tanker of oxygen came in and we were not sure that the buffer stock in the tank would last till Saturday morning. We had expected a bigger tanker of 16 kl and instead a smaller one of 8 kl had come in. This was the routine filling of oxygen in our two separate liquid oxygen tanks,” S Chokalingam, Administrator at Sassoon general hospital, said.

B J Medical College and Sassoon general hospital Dean Dr Murlidhar Tambe said that for the last few days, they had increased the intake capacity of Covid patients. The consumption of oxygen has gone up and our oxygen suppliers (INOX Air products plant at Chakan) have started grumbling. On Friday evening, they sent a tanker with 8 kl of oxygen instead of 16 kl. This supply would not have lasted till Saturday morning and hence we frantically started making calls to the divisional commissioner and district collector.

“However as a precautionary measure, we mobilised all our jumbo oxygen cylinders and kept one with each patient. Those with mild symptoms were shifted to another building on the campus as we did not want to take a chance till the oxygen tanker rolled in,” Dr Tambe said.

So hospital authorities went into an emergency mode with Divisional Commissioner Saurabh Rao, District Collector Dr Rajesh Deshmukh , SDO Khed along with B J M C and Sassoon general hospital Dean Dr Murlidhar Tambe monitoring the activities. “Officials worked throughout the night till the tanks were filled in by 3 a.m.,” Chokalingam said.

At the 11-storeyed multispecialty building, at least seven floors are for Covid-19 patients. The ninth floor has the intensive care unit (ICU) where 120 patients are admitted. Of these, approximately 90 are on ventilator support. Most of the 550 patients here are on oxygen support. “We took abundant precautions to ensure that tankers reach Sassoon before the supply gets over and hence shifted some of those requiring less oxygen flow to another building,” Chokalingam said.

Be it government or private, hospital authorities are on tenterhooks as they are now not keen on admitting patients as they are not sure of the day’s oxygen supply. At Sassoon general hospital too, authorities had planned to ramp up bed strength for Covid patients upto 700 but officials now said that they have decided to hold the expansion effort for a few days.

Pune district collector Dr Rajesh Deshmukh told The Indian Express, “We are monitoring tanker to tanker movement from 11 a.m to 3 a.m the next day and at Sassoon general hospital also we ensure that oxygen was supplied.” Everyday divisional commissioner Saurabh Rao, FDA authorities and we are monitoring and somehow we are meeting the demand daily, he added.