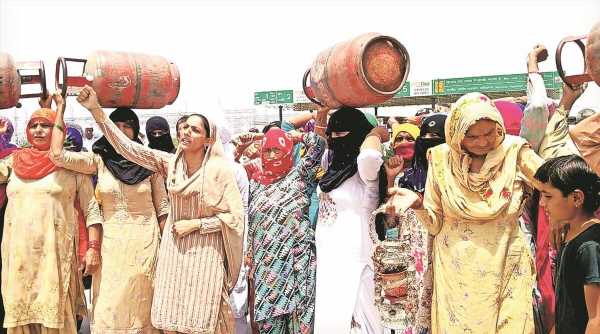 Dozens of women protesters, with LPG cylinders on their heads, were part of the protest too, raising slogans against the government over the increasing prices of LPG and oil at Khatkat toll plaza in Jind district. 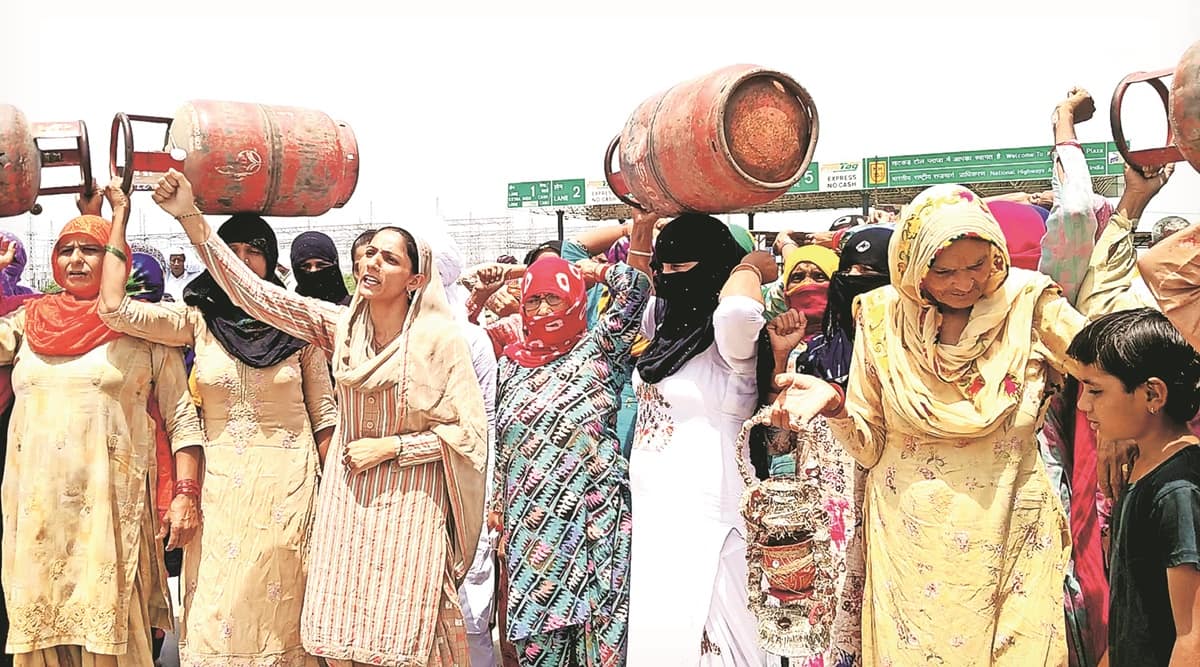 HUNDREDS OF agitating farmers on Thursday honked the horns of their tractors in various parts of Haryana as part of their protests against rising inflation. The agitators parked their tractors, and other vehicles, along the roadsides for more than two hours to register their protest against inflation in the prices of essential items, edible oil, LPG, petrol and diesel on the call of Samyukta Kisan Morcha (SKM).

Dozens of women protesters, with LPG cylinders on their heads, were part of the protest too, raising slogans against the government over the increasing prices of LPG and oil at Khatkat toll plaza in Jind district. Jind BKU president, Azad Palwa said, “By honking, we want to make our voices heard to the MPs sitting in Parliament. We also want to tell the Prime Minister that inflation has increased three times in the recent past and steps need to be taken to check it. The LPG cylinder prices have increased three times within a year.”

On the issue of farmers’ participation in politics, Palwa said, “Why can’t the sons of farmers and majdoors participate in politics in a democracy? Is it limited to only a few houses, whose family members are always elected in different elections?”

Supporting the call of BKU leader Gurnam Singh Chaduni, who had suggested that farmer leaders of Punjab contest the 2022 Assembly polls, Palwa said, “In a democratic system, the power is drawn from politics. If good people are elected to the Assemblies and Parliament, then good laws and policies will be introduced.”

Chaduni on Wednesday had suggested that leaders of farmers and majdoors should contest the upcoming Punjab Assembly polls to form a government and to offer a model of alternative government to the entire country.

“Mission Uttar Pradesh will take place to defeat BJP. And Mission Punjab is needed to offer an alternative model,” he had said.

He had called upon the people of Punjab to launch ‘Mission Punjab’ to change the system even before agitators’ proposed ‘Mission Uttar Pradesh’, which aims to defeat the BJP in the upcoming Assembly elections in Uttar Pradesh.

“As part of the protest against inflation, the farmers at Kitlana toll plaza in Bhiwani district kept sloganeering against Prime Minister Narendra Modi for two hours, from 10 am to noon,” said a local farmer leader Raju Mann.