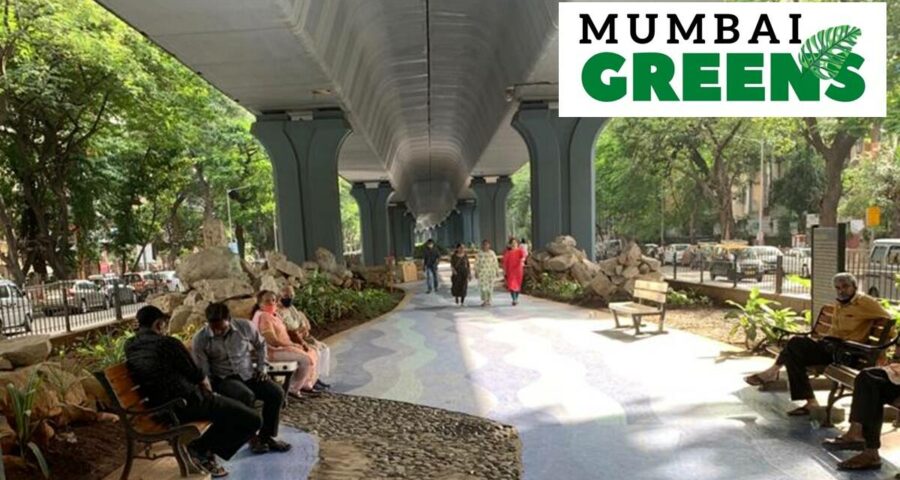 The idea for the garden originated from the residents of the 40 buildings on either side of the flyover. 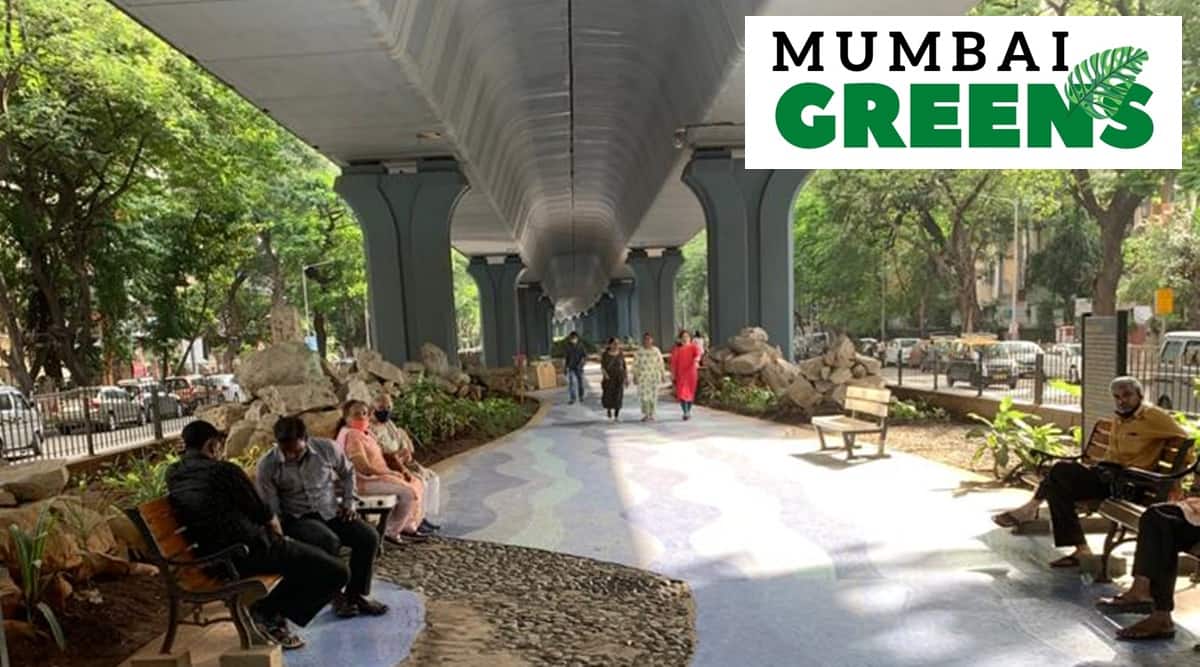 It is not easy to miss this one. A 660 mt sliver of land under one of Mumbai’s busiest flyovers, sandwiched between two carriageways of a road, and wedged between the famous King’s Circle junction at one end, and Ruia College junction at the other. The width of the space is no more than 12 mts.

Yes, it’s a public park fitted under a flyover. All of 7200 sq mts. Not big by the standards of King’s Circle garden (now known as B N Maheshwari Udyan), a park in the roundabout at the junction on the Sion end, and definitely not in the same league as Five Gardens in Dadar East, some distance away on the other side. But precious all the same.

Named after the flyover that goes over it, the Nanalal D Mehta Park is the happy result of “jab proactive citizens met proactive civic officials”. It was not always a pleasant encounter, and even the citizens were at first not entirely happy with the BMC’s ideas for the space, but the end product is “a big hit”, says Nikhil Desai, a retired engineer who lives in the neighbourhood and was one of the earliest to be associated with the idea of a public space under the flyover. On an afternoon last week, he volunteered generously to take me on a guided tour of the park.

We meet at King’s Circle park, negotiate the traffic at the junction, crossing over into the green oasis under the flyover through steel bollards.

The first striking aspect of the park is the mosaic walking track, in various hues of blue. It vaguely looks like the floor of a swimming pool. The impression is not far from wrong, because the park has been designed around the theme of the Narmada, from the river’s starting point at Amarkantak to where it empties into the Arabian Sea at Bharuch. The blue walkway is the river, and on either side is greenery and the landscape symbolising eight landmarks along the river. In some places, there is seating, resembling the steps of a ghat on the banks of the river.

Unlike Kings Circle Park, a part of which is under the flyover, all of this garden is covered by its concrete width, keeping it shaded throughout the day. When it rains though, it pours through the thin separation between the flyover’s two carriageways.

It is nearing 5 pm as we walk towards the Ruia junction. The roaring traffic on either side is increasing, but so is the park filling up with evening walkers and strollers. People walk in from bollard gates at intervals along the length of the park. They walk up and down purposefully to burn calories. Senior citizens settle down on the park benches. Some rest for a chat on the ghat-like steps along the walkway. 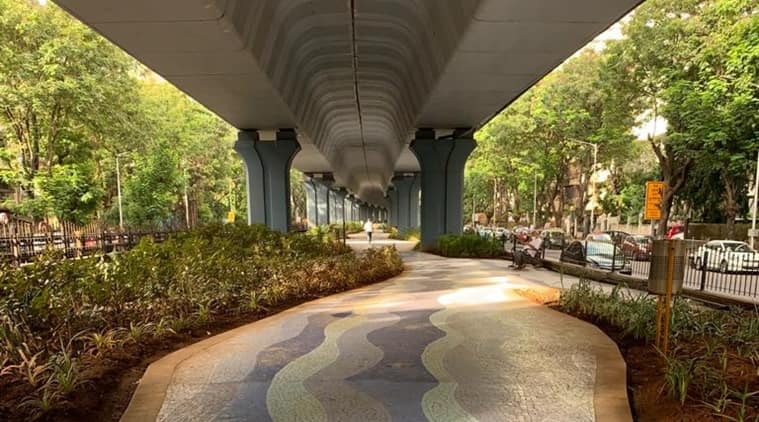 The area is fenced on either side by an iron grill, barely visible because of the dense foliage on both sides of the broad walkway.

“It’s totally traffic-safe inside here,” Desai says. Unfortunately, it’s not noise proof. The blare of horns and the noise from motor engines of all kinds cannot be cut out except with a pair of ear muffs, or better, with earphones with your own music playing.

Armed with a phone and earphones, Pooja Chedde, a class 12 student, has completed a dizzying number of rounds while Desai and I slowly make our way to the Ruia end. “I come here to take a break from my studies,” she says, stopping her music to speak. Her home is in one of the lanes off the main road. “I started walking here only a few days ago, but my mother has been coming for a longer time, and she really enjoys this space,” she says.

Before the pandemic, it was a regular hangout for students from Ruia College, Desai says. The idea for the garden originated from the residents of the 40 buildings on either side of this section of the flyover. The flyover had already come up by then and the space underneath had become a parking spot for taxis. Residents of the area feared that it would turn into an open air urinal, says Desai, who described himself as a citizen activist.

They had on their side a High Court judgment of 2013 that had expressly prohibited the space under flyovers from being used as parking lots. When they first took their case to BMC, they were told to approach MMRDA, which had built the flyover, and was therefore the owner of the land underneath.

The MMRDA agreed it could be developed into a garden, and invited expressions of interest from private players to execute the plan, and asked the residents to put down ideas. Their plans were fanciful, and hugely expensive.

“Someone wanted a badminton court, someone else wanted a basketball court. Forty landlords had 40 different ideas about what should be included,” Desai recalled. The proposal became massive. MMRDA had told the residents that they would need to raise at least half the money – a whopping Rs 1.50 cr – and show it in a specially opened bank account for the project to get off the ground. 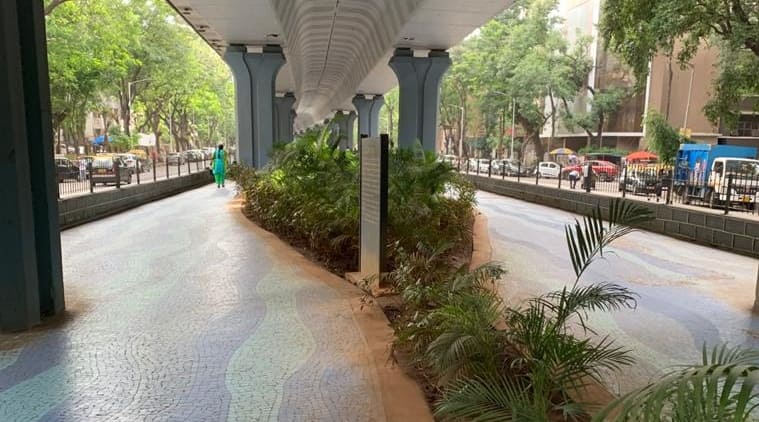 The community believed that funds could be raised from private parties through Corporate Social Responsibility programmes. Even as the fundraising hit a wall, MMRDA informed the residents that the land had been transferred back to the BMC.

Some of the residents decided to approach the local MLA, who promised he would have the plan implemented. In the 2014 election, he barely scraped through. The promise remained unkept.

Desai said he then approached the BMC Commissioner (the present chief secretary Sitaram Kunte was then heading the civic body) who was receptive. Within a short period, the BMC readied its own plan for the garden.

“The community was very angry because we had rejected their plan, which was unviable. BMC has its own specific norms. They even tried to stop the work,” recalls Umesh Parvade, civil engineer in the Garden Infrastructure Cell. “But they finally appreciated it, because what we gave them was a state of the art garden. We finished the project in 2015 and handed it over to the Gardens department.”

At one end of the garden, specially built water tanks provide the supply for watering the plants and washing down the entire place once a day. There used to be lighting running along the length of the park through the foliage beds, making the place look special in the evenings. Those lights are not working anymore, but the streetlights provide enough light for late evening walkers.

Desai says that the garden was such a good idea that “compliments started pouring in from (Indian expatriates) in Dubai and America”.

BMC has now replicated the idea under the flyover at Dadar TT. But because of several traffic lights, it is a garden in five sections, unlike this unbroken stretch.

The exhaust from all the vehicles in this garden under a flyover is a problem, but the green shield of the plants is likely working to clean the air. And the pandemic induced masks are also good at blocking the fumes.