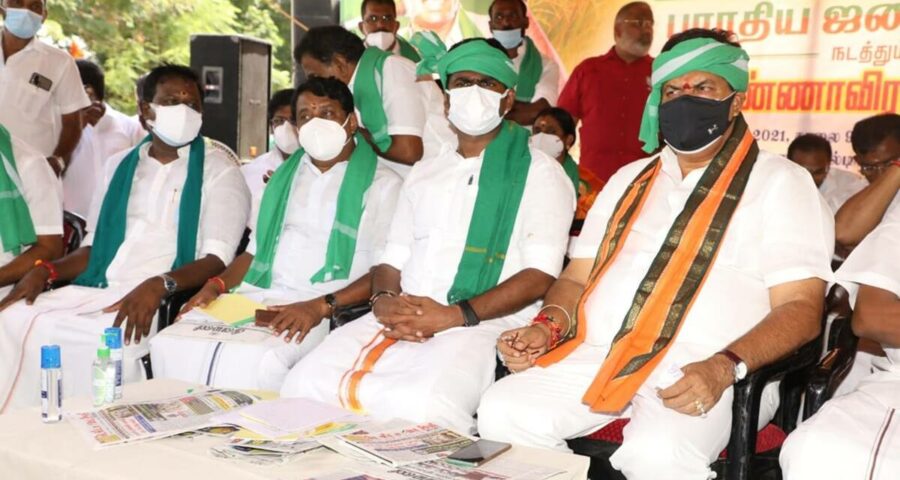 “The inter-State River Water Dispute Act is clear. You cannot build the dam without the consent of the lower riparian state. BJP always stands for the well-being of the farmers and it will not allow the construction of the Mekedatu Dam,” Annamalai asserted. The Tamil Nadu unit of BJP staged a hunger protest in Thanjavur Thursday against Karnataka’s move to build a reservoir on Cauvery at Mekedatu.

Amidst a bullock cart procession, wearing green shawls, leaders and cadres of the saffron party demanded that neighbouring Karnataka should not go ahead with the balancing reservoir project which aims to meet both drinking water needs and power generation.

Senior BJP leaders, including Pon Radhakrishnan, C P Radhakrishnan, H Raja, participated in the protest. Lashing out at the Karnataka opposition parties for backing the BJP government on the issue there, Annamalai claimed the law was clearly in favour of the lower riparian state, Tamil Nadu, and that Karnataka could not build a dam without its consent. While addressing the party members at the day-long fast, he said, “Our fast is to demand the Karnataka government to give up its plans to build the Mekedatu Dam. We condemn the opposition parties for asking the government to go ahead with the project. We will not allow its construction.”

“The inter-State River Water Dispute Act is clear. You cannot build the dam without the consent of the lower riparian state. BJP always stands for the well-being of the farmers and it will not allow the construction of the Mekedatu Dam,” Annamalai asserted.

He took a swipe at the ruling DMK government for allegedly giving more importance to enhancing TASMAC liquor sales revenue rather than working towards the welfare of the farmers in the state, claiming it had not conducted a single review meeting pertaining to agriculture.

Attacking actor and founder of Makkal Needhi Maiam (MNM) Kamal Haasan and Tamil Nadu Congress Committee president K S Alagiri for mocking BJP’s agitation, he said both the leaders humiliated the farmers as they could not comprehend the seriousness of the issue.

“Kamal Haasan’s campaign during the assembly election in Coimbatore resembled a film shooting. I won’t ask him to stay away from politics, people will send him home,” he said.

Meanwhile, responding to the protest to pressure the Karnataka government not to construct the dam at Mekedatu, Karnataka Chief Minister Basavaraj Bommai Thursday morning said that the government will not compromise on the Mekedatu Dam project.

“During times of water distress, this project will be very useful for both the states. Whoever is protesting there (Tamil Nadu) is doing for politics. We have already prepared a detailed project report and submitted it to Jal Shakti Minister Gajendra Singh Shekhawat and I have confidence that the DPR will be approved by the Centre and the project will be taken up soon.”